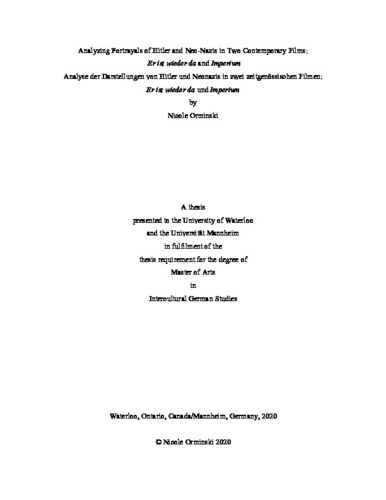 World War II occurred three quarters of a century ago, but Nazis continue to be a popular choice of antagonist in contemporary film. These characters include not only those set in 1940s Germany, but also portrayals of Hitler as well as neo-Nazis in the modern day. Two films that contain such characters are Er ist wieder da (David Wnendt, 2015) and Imperium (Daniel Ragussis, 2016): Er ist wieder da portrays a revived Hitler in 2014 Berlin, and Imperium tells the story of an FBI undercover agent infiltrating a group of neo-Nazis around Washington, D.C. This thesis analyzes characters in the films to explore the portrayal of neo-Nazism in the present day. The analysis is carried out in three parts: by placing these portrayals into a larger film history; by using Jens Eder’s heuristic model “die Uhr der Figur” to investigate the characters; and by reviewing events in both the United States and Germany which define the cultural moments at the time of the films’ premieres. Film history contextualizes the ways in which Hitler and neo-Nazis have been portrayed over time. Portrayals of Hitler range from comedic reductions of the character to sympathetic humanizations, while depictions of neo-Nazis are shown as either reformed or non-reformed (usually undergoing reformation over the course of the film). Eder’s model, as described in Die Figur im Film: Grundlagen der Figurenanalyse (2008) and “Understanding Characters” (2010), provides a comprehensive, foundational understanding of the construction of these depictions by taking into account both the way in which the characters are constructed by filmmakers and the way in which they are received by audiences. An examination of the two countries’ cultural moments provides insight to the films’ resonance at the time of their production. The portrayal of characters in both films is indicative of the development of national discourses on neo-Nazism in the United States and Germany, as what qualifies as a socially acceptable portrayal of Hitler and neo-Nazis has changed over time. Hitler in Er ist wieder da toes the line of humanization, but more importantly, he embodies the ever-present susceptibility of a people to their prejudices. Similarly, the leading neo-Nazi in Imperium is not a caricature, but rather a calm and seemingly rational bigot who is dangerous because he fits in so seamlessly with mainstream society. These portrayals critique the underestimation of the influence of neo- Nazism in their respective societies, as well as the fortification of this influence by the misuse of media.