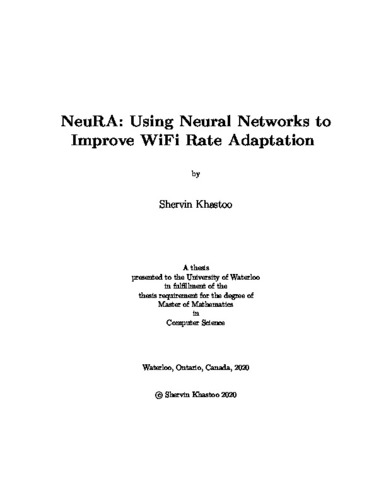 Although a variety of rate adaptation algorithms have been proposed for 802.11 devices, sampling-based algorithms are preferred and used in practice because they only require frame loss information which is available on all devices. Unfortunately, sampling can impose significant overheads because it can lead to excessive frame loss or the choice of suboptimal rates. In this thesis, we design a novel neural network based rate adaptation algorithm, called NeuRA. NeuRA significantly improves the efficiency of sampling in rate adaptation algorithms by using a neural network model to predict the expected throughput of many rates, rather than sampling their throughput. Furthermore, we propose a feature selection technique to select the best set of rates to sample. Despite decades of research on rate adaptation in 802.11 networks, there are no definitive results which determine which algorithm is the best or if any algorithm is close to optimal. We design an offline algorithm that uses information about the fate of future frames to make statistically optimal frame aggregation and rate adaptation decisions. This algorithm provides an upper bound on the throughput that can be obtained by practical online algorithms and enables us to evaluate rate adaptation algorithms with respect to this upper bound. Our trace-based evaluations using a wide variety of real-world scenarios show that NeuRA outperforms the widely-used Minstrel HT algorithm by up to 24% (16% on average) and the Intel iwl-mvm-rs algorithm by up to 32% (13% on average). Moreover, the upper bound given by the offline optimal algorithm shows a throughput up to 58% (30% on average) higher than Minstrel HT and up to 31% (12% on average) higher than NeuRA. Hence, NeuRA reduces the gap in throughput between Minstrel HT and the offline optimal algorithm by half. Additionally, our results show that several-fold improvements over Minstrel HT shown in previous work are unlikely to be obtained in real-world scenarios. Finally, we implement NeuRA using the Linux ath9k driver to show that the neural network processing requirements are sufficiently low to be practical and that NeuRA can be used to obtain statistically significant improvements in throughput when compared with Minstrel HT.