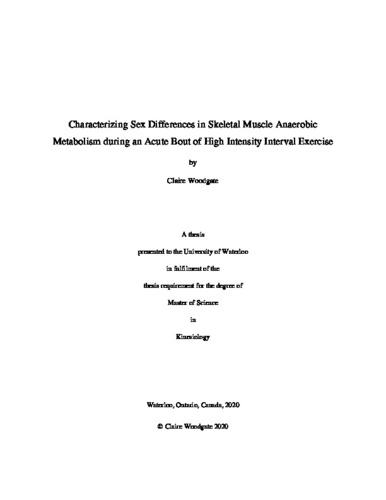 INTRODUCTION: Exercise is known to improve insulin sensitivity (IS); however, its effectiveness may be absent or blunted in women, particularly following high intensity interval (HII) training. Sex differences in anaerobic metabolism during an acute bout of HII exercise have not yet been established and may underpin the lack of effect of HII training on IS in women. Furthermore, it is unclear whether the standardized HII exercise protocol induces similar exercise intensities in men and women which may confound the research findings. PURPOSE: The purpose of the proposed research was to examine whether sex influences the exercise response and/or anaerobic metabolism during an acute bout of high intensity interval exercise. METHODS: Twenty-four young, healthy, recreationally active males (n=12) and females (n=12) were recruited for this study. Men and women were matched according to their maximum aerobic capacity (VO2peak) relative to their fat-free mass (mL O2 • KgFFM-1 • min-1). The exercise protocol consisted of a 5-min warm up, followed by 10 intervals of 60 sec at high intensity (90% HRmax), interspersed with 60 sec at low intensity (50 Watts) and ended with a 5 min cool down. Throughout the exercise bout, heart rate (HR) and rating of perceived exertion (RPE) using the Borg Scale were recorded every minute and blood lactate was recorded every 3 minutes. Muscle biopsies were taken from the vastus lateralis muscle before and after the exercise bout. Muscle samples were analyzed for protein content of metabolic enzymes [phosphorylated pyruvate dehydrogenase (PDH) E1α, and phosphorylated creatine kinase (CK)] and Periodic Acid Schiff (PAS) stained for determination of muscle glycogen utilization. Indirect calorimetry was used to compare indices of exercise intensity and whole-body fuel utilization between men and women during the exercise bout. RESULTS: Sex had no effect on HR (p=0.17) or RPE (p=0.66) throughout the exercise bout; however, %target HR during the high intervals was higher in women (p=0.002). Women exercised at a higher relative %VO2peak during the warm up (p<0.0001), high intervals (p=0.011) and cooldown (p=0.005), but not during the low intervals (p=0.25). Women also worked at a higher wattage during the low intervals when expressed relative to kg lower body fat-free mass (LB FFM) (p<0.0001). During the high intervals, men worked at a higher absolute wattage (p<0.001) and relative wattage when expressed relative to kg LB FFM (p=0.02). Men also expended more energy during exercise (p=0.001) but when expressed relative to kg FFM, there was no difference in energy expenditure between the sexes (p=0.13). Sex had no effect on blood lactate throughout the exercise bout (p=0.35) however lactate AUC was higher in men (p=0.007). Glycogen utilization and phosphorylation status of PDHE1α and CK decreased in both men and women during exercise (p<0.0001, p=0.002 and p=0.002, respectively), with no difference between the sexes. Elevated RER values obtained from indirect calorimetry resulted in invalid whole-body substrate oxidation estimates. CONCLUSION: Markers of HEPT and glycolysis did not differ between men and women, however the greater lactate AUC in men suggests that men relied to a greater extent on anaerobic metabolism during exercise. Importantly, using the standard HII exercise protocol caused women to exercise at a higher %VO2peak, which was mostly likely due to the difference in the relative intensity of the low intervals. Future work should consider using a relative workrate during low intervals to better equate exercise intensity between the sexes.