Toward standardization of Quantum Key Distribution 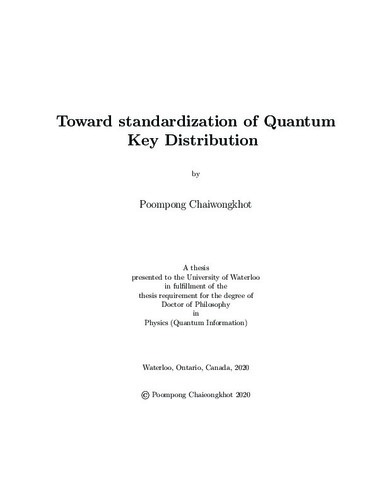 Information security becomes an inseparable part of our everyday life. An encryption method widely used today is public-key encryption. The security of this method is based on a hard to solve mathematical problems against an adversary with limited computational power. Such an assumption could be broken as our understanding of the mathematics being improved or new computation tools being developed. One such tool that poses a threat to the public key encryption is a quantum computer. As a result, a new encryption method with a new security assumption is required. Quantum key distribution is a point-to-point symmetric key distribution method with security based on the law of physics. In theory, the key generated by QKD is informationtheoretic secured. However, in practice, physical devices could have flaws or possess some behaviors deviated from the theoretical model. These imperfections could open security loopholes for an adversary to exploit, compromising the security. Thus the security verification and system characterization of practical implementation of QKD are necessary. The necessity of this verification is further emphasized as several QKD systems are being commercialized and used in several discrete communication links today. To extend this new encryption system’s practical implementation on a wider network scale requires a set of standards or common practices for developers and service providers to follow. This set of rules is set to ensure the compatibility of different device models in the network and ensure the security of each component in the system, which would affect the security of the system as a whole. To fulfill standardization and certification criteria, a record of best practice on security analysis, system design, device characterization, and security verification of QKD implementation is required. The research projects throughout my Ph.D. study contribute toward this practice. These studies also address some issues and provide possible solutions to the development of a standard for QKD. This thesis is a collection of six experimental studies on performance evaluation and security verification of different components of practical quantum key distribution systems. The first study is a comparison between the performance of the QKD system with quantum dot (QD) as a single-photon source and the performance of QKD with weakcoherent pulsed (WCP) source. The result shows that the QKD with QD could generate the key at higher channel loss than WCP QKD using the same laser source. This result shows the potential of QKD with a single-photon source as a candidate for secret key distribution over high channel loss, such as up-link satellite-based QKD. The second study is a theoretical study on the method to characterize the QKD system against the Trojan-horse attack being considered as a standard for the QKD system. The result shows a possible loophole of this method against a more powerful adversary than assumed in the previously proposed model. An improved version of characterization against a more general form of Trojan-horse attack has been proposed. The third experiment is on the information leakage from a free-space QKD receiver due to detector backflash, a photon produced by the detector upon detection. The result shows that the backflash photons carry the information of the ’clicked’ detector that could be transmitted back to the channel and discriminated by Eve. An experimental demonstration of this attack has been performed. Countermeasure both in theory and practical setup has been proposed. The next experiment is on the effect of atmospheric turbulence on Eve’s spatial-mode detection efficiency mismatch attack on the free-space QKD system. We show that, by using a phase-only spatial light modulator (SLM) and hologram created by Zernike polynomials, atmospheric turbulence with various strength covered from sea level to upper atmosphere can be experimentally emulated in the lab environment. We then use that setup to show the limit of the distance that Eve’s attack is successful. The theoretical limit of the attack distance also shown. In the fifth study, we use the SLM and Zernike polynomial holograms to characterize a free-space QKD system against spatial mode attack. The result shows that, with higherorder spatial modes and finer control of wavefront intensity distribution, Eve could bypass the countermeasure proposed in our previous study. We proposed a more robust version of countermeasure against spatial mode attack. The new countermeasure is verified by the SLM setup. The last study is on the fake-state attack on the transition edge sensor (TES). The result shows that TES’s voltage response can be deterministically controlled by Eve using bright laser through the input channel. It also shows that the photon number result from TES can be controlled by Eve. An attack model exploiting this imperfection has been shown. In addition to the contribution to the standardization of the QKD system, I hope that the result of this thesis would emphasize the necessity of security verification of the QKD system and the verification of countermeasure and characterization method against more general attack model. Although the unconditional security, promised in theory, could not yet be achieved, this loop of hacking and patching should provide us information and insight on which security level could be claimed from the practical QKD devices implementing today.