Organic and Inorganic Nanostructured Materials as Electrodes for Hybrid Capacitors 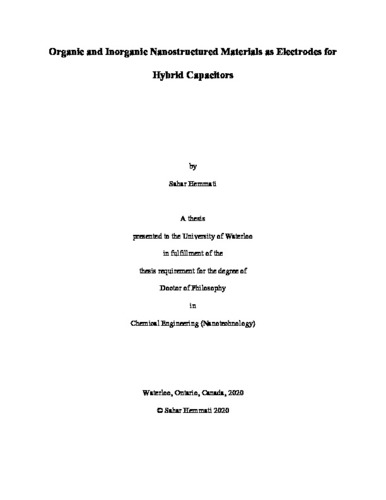 Global energy demands are expected to continuously grow in the coming decades, while the dominant source of energy remains finite fossil fuels. In addition to this challenge, excessive consumption of fossil fuels has resulted in severe environmental problems. Motivated by these problems, research on the development of electrochemical energy storage and conversion devices, as environmentally friendly alternatives to fossil fuels, has increased drastically. Even though the high energy density and high power density of, respectively, secondary batteries and electric double layer capacitors allow these devices to drive many advanced technologies, the gap between their electrochemical performances has offered tremendous opportunities for researchers to investigate new chemistries. One exciting approach is to design a device comprised of electrodes with two different charge storage mechanisms: fast delivery of low energy on one electrode, and slow delivery of high energy on the other. This design produces hybrid devices such as lithium-ion capacitors and sodium-ion capacitors, both of which have attracted considerable research attention. On the Ragone plot, the electrochemical performances of these devices are located between those of secondary batteries and electrochemical supercapacitors, meaning that they offer fast delivery of moderate energies. These devices, however, face several technological obstacles such as unsatisfactory rate performance and limited energy density. Additionally, the cyclability of hybrid capacitors is insufficient. These challenges originate from the slow kinetics of ion insertion or extraction into or from the anode, which is typically an intercalation-type material, and the kinetic imbalance between the electrodes due to the different charge-storage mechanisms that govern the charge storage on the cathode and on the anode. Since the charge-storage performance directly depends on the surface and bulk characteristics of the electrodes, nanocomposites possessing novel morphological features with doped heteroatoms are needed to enhance these devices' rate performances and energy densities. To address the problems, research on the electrode materials of hybrid devices has considerably advanced. For the cathode side, the focus has been on designing biomass-derived high specific surface area carbon materials. Moreover, designing nanocomposites that can offer pseudocapacitance mechanism and enhanced electronic conductivity, thus facilitating ion transfer, has been the focus for preparing anode materials. In particular, research on the anode materials for sodium ion devices has become very attractive due to the large availability of sodium resources. Despite the advancement of the hybrid devices in research, however, a set of challenges remains. In response, this thesis, through three studies, attempts to address the difficulties of limited energy density and low rate performance in hybrid devices. In the first study, a facile approach has been used to prepare polyaniline as a precursor to synthesizing highly porous and nitrogen-doped carbon material. Oxidative polymerization of aniline in the presence of a multidentate acid has been employed followed by annealing and activation. The resulting carbon materials were then optimized and used as the cathode of lithium-ion capacitors and sodium-ion capacitors. Physicochemical characterizations have revealed an interesting interconnected morphology, offering abundant macropores for the electrolyte infiltration and reduction of ion transfer pathways. Moreover, the analysis of specific surface area has revealed the hierarchical structure of the synthesized carbon, with the majority of micropores enhancing the double layer capacitance. Electrochemical half-cell tests, one with lithium and the other with sodium, have shown that the carbon material prepared in this research greatly outperforms commercial activated carbon in terms of specific discharge capacitance. A study of the synthesized carbon’s properties before the activation suggests that this low surface area scaffold can also serve as a substrate for the deposition of intercalation-type materials to boost the electronic conductivity as well as diffusional properties on the anode side. In the second study, inspired by the synthesis procedure in the first study, a new nanocomposite of a T-Nb2O5/tubular carbon structure was synthesized. For the oxidative polymerization of aniline, the multidentate acid in the first study has been replaced with an acidic precursor of niobium dioxide to yield an in-situ incorporation of T-Nb2O5 nanoparticles, a pseudocapacitive material, into a nitrogen-doped tubular carbon structure. The Li+ storage enhancement has been ascribed to increased electron conductivity and the unique morphology of the composite with its hollow interior and abundant pores. Moreover, according to the calculated pseudocapacitive mechanism contribution to the total charge storage, the fast-electrochemical reaction has benefited from the pseudocapacitive property of nitrogen-doped T-Nb2O5. In the third study, motivated by the need for a sustainable alternative to lithium-ion devices, we searched for a promising anode material for sodium-ion capacitors. Molybdenum disulfide has been selected for investigation. To suppress the volume variation and agglomeration of MoS2 nanosheets during charge and discharge, nanosheets were deposited on the crosslinked polyaniline scaffold prepared in the first study. The half-cell electrochemical performance has shown an enhanced rate capability compared to that of pure MoS2. To dig into the underlying cause, the diffusion coefficients of Na+ in the nanocomposite and the control groups were calculated using galvanostatic intermittent titration technique. The results revealed an increased diffusion coefficient owing to the unique morphological feature of the nanocomposite. Moreover, X-ray photoelectron spectroscopy analysis explained the reason behind the longevity of a full cell NIC, based on MoS2/NC as the anode and the carbon material prepared in the first study as the cathode, to be the strong interaction between nitrogen moieties and MoS2. All the work in this thesis centers around the search and enhancement of electrode materials for hybrid lithium-ion capacitors and sodium-ion capacitors, and yet, plenty of opportunities remain to further extend the knowledge gained here to improve the performance of hybrid devices. As an example, other metal oxides or dichalcogenides can be selected to study the in-situ polymerization of aniline, enabling the resulting carbon structure to boost the electron conductivity of these materials, allowing them to benefit from high power density and high energy density.