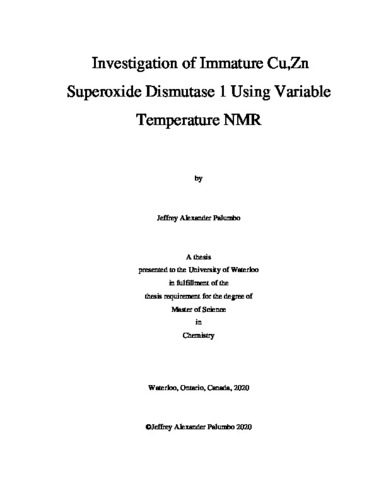 Amyotrophic lateral sclerosis (ALS) is an adult onset neurodegenerative disease that results in the death of motor neurons in the spinal cord, cortex, and brain stem. The vast majority of ALS cases arise sporadically, but a small subset, fewer than 10%, acquire the disease through a hereditary mechanism, termed familial ALS (fALS). Clinical studies suggest that nearly 20% of fALS patients share mutations in the protein Cu,Zn superoxide dismutase (SOD1), an enzyme that scavenges superoxide radicals. SOD1 adopts a homodimeric β-barrel structure that contains a conserved disulfide bond and binds one structural zinc and one catalytic copper ion per monomer. Currently, there are 187 mutations known to be associated with fALS. These mutations are located in structurally and functionally important regions of the protein. It is accepted that these mutations result in a gain of toxic function that leads to the formation of protein aggregates, containing mature (holo) and immature SOD1. Protein aggregation has been observed in a number of other neurodegenerative diseases, such as Alzheimer’s, Huntington’s and Parkinson’s disease. This thesis explores the effects of specific mutations on SOD1 folding and misfolding, using biomolecular NMR methods that provide structural information at a resolution of individual amino acid residues. To achieve this goal, variable-temperature NMR, a well-established method that allows the correlation of protein structural stability with temperature, experiments were performed on a variety of SOD1 mutants. Specifically, amide proton (1H) temperature coefficients serve as indicators of hydrogen bonding and provide valuable information on local unfolding events occurring within a protein. With the most immature form (apo2SH) of SOD1, mutant residues cause changes in temperature coefficients mostly within their own vicinity and provide insight into the disrupted processes observed in mutant SOD1. As SOD1 matures, the majority of residues experience a significant increase in structural stability, most notably following the binding of zinc. To date, amide nitrogen (15N) temperature coefficients have shown no discernable patterns, and therefore, their uses in structural interpretations have been limited. To determine their usefulness, 15N temperature coefficients must be referenced to random coil, removing their sequence-dependence. These referenced 15N temperature coefficients are extremely sensitive to deviations from random coil and are useful for reporting on local structure. Similarly, secondary chemical shifts also report on local secondary structure. The structural data obtained with these methods agree well with those from crystallography. During SOD1 maturation, there is a widespread increase in structure; however, a small subset of hydrophobic residues in the dimer interface and core of the protein show decreased order. These residues may be reporting on either conformational strain or an altered packing structure that results from dimerization. Curved temperature dependences report on the excursion of a residue to an excited state. The changes in curvature patterns in mutant SOD1 report on the structural and functional disruptions associated with the respective mutations. With native SOD1, maturation is accompanied by curvature decreases throughout the protein, notably in structurally and functionally important sites. In contrast, during the maturation of mutant SOD1 there are curvature increases through structurally important sites, identifying regions of the structure as dynamic hotspots that may be involved in aggregation. Additional curvature experiments determine that near the Tm of a protein there is a sharp increase in curvature, likely reporting on the onset of a global unfolding event. Lastly, isoelectric focusing is an electrophoretic method that separates proteins by their isoelectric points (pI) and is used to determine a protein’s diffusion coefficient. This method may be useful as a diagnostic tool for determining the mutant SOD1 and maturation states in patient samples. From experiments on various forms of purified SOD1, it is determined that the pI of SOD1 decreases as it matures, SOD1 is likely in a dimeric form during the experiments, and all SOD1 expressed in the wildtype (WT) background aggregated during focusing, likely as a result of the free cysteines in WT SOD1. From these studies, it appears that this method is likely not well-suited for studying the SOD1 present in patient samples.