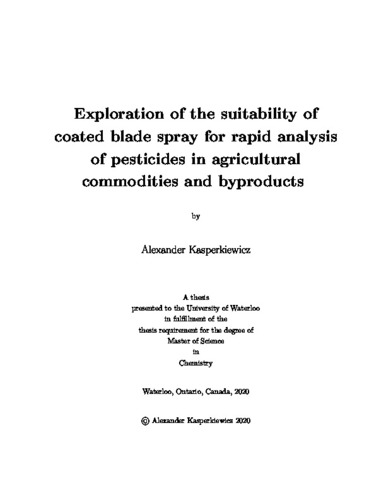 The multiresidue analysis of pesticides in domestic and imported agricultural products is completed on hundreds of thousands of samples yearly by regulatory agencies in the United States, Canada, and Europe. Currently, regulatory agencies rely on derivatives of the Quick, Easy, Cheap, Effective, Rugged, Safe analytical workflow, which suffers from high sample and organic solvent usage, as well as automation difficulties. In order to improve scalability, in terms of time of analysis, amenability to automation, and sample size requirements, alternative techniques based on solid-phase microextraction (SPME) directly coupled to mass spectrometry (MS) are worth exploring. This thesis presents the exploration of one of such techniques, known as coated blade spray (CBS), to improve upon existing sample preparation shortfalls through the development of autosampling hardware, and applications for the analysis of pesticides in fruit juice, fruit, and cannabis product matrices. Firstly, automation reduces analysis time, human intervention, and cost per sample. In this thesis, a suitable automated CBS workflow is proposed for the screening and quantitation of multiple substances (i.e. drugs of abuse and pesticides) in complex matrices. In an attempt to reduce the total sample analysis time, several parameters were investigated, including tandem mass spectrometry (MS/MS) dwell time, CBS spray time, and extraction time. Model compounds with a moderately wide range of molecular weights, polarities, and structural diversity were selected in order to monitor analytical figures of merit during method optimization and autosampler development. As a proof-of-concept as well as to set the stage for the subsequent chapters of this thesis, an automated method for the screening and quantitation of more than 150 pesticides from apple juice was demonstrated on both triple quadrupole and orbitrap instruments in under 15 seconds total sample analysis time. Building on the aforementioned fruit juice proof-of-concept, the method development of a similar panel of pesticides in apple, blueberry, grape, and strawberry matrices was explored, however with the goal of further CBS-MS/MS method validation with liquid chromatography coupled to tandem mass spectrometry (LC-MS/MS). For all four matrices, over 125 compounds were found to meet EU SANTE guidelines with regards to linearity, precision, and accuracy while reaching limits of quantitation for both CBS-MS/MS and SPME-LC-MS/MS methods below their minimum regulatory limit. Additionally, real-world samples of all matrices were processed with detected residues (n = 57) yielding good agreement between instrumental methods (percent differences < 20 % for 73 % residues), supporting CBS as a stand-alone analysis technique or a suitable complement to LC confirmation of pesticides in fruit matrices. Nearing the upper limit of matrix difficulty (i.e. author-defined as inversely proportional to water content and proportional to the concentration of matrix-sourced interferences in a matrix) explored in this thesis, the method development steps for the extraction of 74 target pesticides from cannabis oil via SPME for analysis with both LC-MS/MS and CBS are communicated. The exploration of a washing step to remove adhered oil whilst minimally desorbing extracted analytes along with the implementation of central composited design investigation to examine compound extraction kinetics in the non-polar matrix yielded a workflow that was validated via both instrumental techniques. Of the initial target list, 48 pesticides were found to be suitable for screening or quantitation via CBS with performance validated via LC-MS/MS. The majority of compounds were found to meet the EU SANTE guidelines for analysis (i.e. linearity, precision, accuracy) whilst reaching limits of quantitation below or at Health Canada minimum regulatory limits (majority at 10 ng/mL). Examination of factors contributing to poor quantitation of pesticides via CBS are shared and explored, such as contributing isobaric interference sourced from plant byproducts and carrier oil. Following this, experiences regarding dried cannabis flower analysis are shared, with significant analyte-matrix binding along with plant-sourced co-extractives determined as sources of difficulty to method development efforts.

Alexander Kasperkiewicz (2020). Exploration of the suitability of coated blade spray for rapid analysis of pesticides in agricultural commodities and byproducts. UWSpace. http://hdl.handle.net/10012/16240