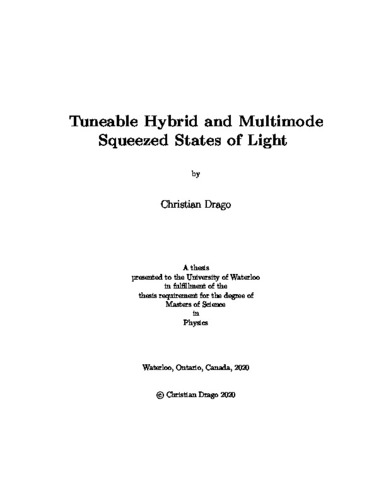 Gaussian quantum states of light have many applications in quantum technologies. Two of the most widely used Gaussian quantum states of light are the single- and two-mode squeezed states. In this thesis, we propose the generation of a hybrid of these two states, which has both properties of single- and two-mode squeezed states. We then extend our method to the generation of multimode squeezed states which posses N-partite entanglement. Our states are defined using Gaussian frequency modes, and our method relies on a nonlinear-optical process called spontaneous parametric downconversion. We shape the joint spectral amplitude of the generated light in two ways, by spectrally engineering the light incident on the crystal and by the engineering of the nonlinear crystal to have desired properties. We first use our method to generate tuneable hybrid squeezed states and then extend it to multimode squeezed states. We then investigate design considerations for the nonlinear crystal and study the effect of fabrication errors. The tuneable hybrid and multimode squeezed states are localized in both frequency and time, making them ideal for a variety of quantum information protocols. We expect that the states will be used to generalize many quantum information protocols to their multimode counterparts, such as, multi-parameter quantum metrology, multi-channel quantum imaging and multi-partite teleportation. Our work will therefore broaden the applicability of optics for the development of quantum technologies.