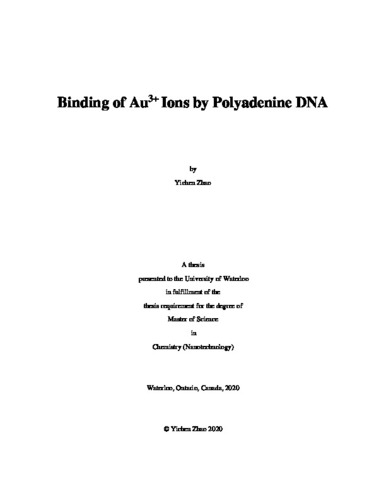 Interactions between DNA and metal ions are important for many applications such as metal sensing, therapeutics and nanotechnology. Many studies have already been published on these topics. DNA can bind metal ions via its phosphate backbone and the nucleobases. The phosphate backbone likes to bind hard metal ions, whereas the bases tend to coordinate with softer metal ions. Gold in particular is one metal that has many interactions with DNA. Gold nanoparticles are very stable and DNA-functionalized nanoparticles have been used for biosensing, drug delivery and the design of smart materials. However, many of these studies have been carried out on gold surfaces where gold has an oxidation state of zero. The study of the interactions between gold ions (Au3+) and DNA has been limited. Au3+ is a highly soft metal ion and it may have strong interactions with DNA bases. The goal of this thesis is to study the interactions between gold ions and DNA. Fluorescein (FAM) labelled 15-mer homopolymer DNA (FAM-A15, C15, G15, and T15) were first incubated with a source of Au3+ ions (HAuCl4). The reaction products were characterized by denaturing gel electrophoresis and kinetic studies were done using fluorescence quenching assays. In the electrophoresis studies, little to no products were observed with T15 and C15 DNA. A smearing of the gel electrophoresis bands along with some fluorescence quenching was observed with both A15 and G15 DNA suggesting stable complex formation that survived the denaturing gel electrophoresis conditions. A15 DNA showed complete reaction, while G15 showed around 80% reaction yield after 1 hour. Since poly-A DNA showed the highest activity for binding to Au3+, studies of the formation of the polyadenine – Au3+ complex were then conducted as a function of pH and salt. Complex formation was favored at a lower pH (pH 4) and would not form under higher pH (pH 8) conditions. Salt was found to be required for Au3+ to react with DNA. Four different salts (NaF, NaCl, NaBr, and NaI) were tested to see the effects on binding kinetics. The addition of NaF and NaI did not allow the formation of the Au3+-poly-A complex, but NaCl and NaBr allowed the formation of this complex. Therefore, a moderate affinity ligand such as Cl- and Br- favored the reaction. A random 24mer DNA was then compared to A15 for binding to Au3+ and other metal ions. Both DNA only showed evidence of complex formation with Au3+ and not with other metals including Hg2+ and Pb2+. Fluorescence quenching assays of A15 and Au3+ were done as a function of concentration of different salts. First order kinetic rate constants were found to be 0.60 mins-1, 0.91 mins-1, 1.5 mins-1, and 1.9 mins-1 for buffers with no salt, 100 mM NaBr, 100 mM NaCl, and 10 mM NaBr respectively. This reaction was also found to be reversible as the fluorescence could be recovered using potassium cyanide (KCN) or glutathione (GSH). When added post complex formation, KCN could recover almost all the fluorescence while GSH could recover around 60%. The effects of Au3+ ions on the catalytic activity of the 17E zinc dependent DNAzyme were also studied using gel electrophoresis. Under normal conditions, 17E cleaves an RNA substrate with a cleavage percent of 71%, however with concentrations of 25 mM Au3+ and above, the cleavage of the substrate was completely inhibited. The Au3+ was found to be binding to the DNAzyme-substrate duplex in a similar fashion to A15.