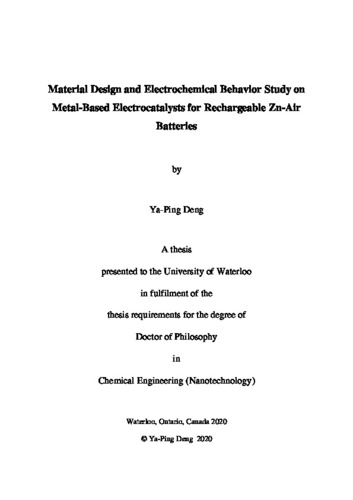 Zn-based electrochemistries can provide bivalent redox, reserve abundancy in earth, moderate reactivity, and compatibility with aqueous electrolyte. When comparing to Li-based battery technologies, their superiorities in energy/power density, cost and safety are demonstrated. As the sub-branch of Zn-based electrochemistries, rechargeable Zn-air battery has drawn tremendous research attention in the past decade and been considered as one of the most promising candidates for commercial energy storage and conversion systems. However, some challenges still remain at its core components and hinder the commercialization of its rechargeable versions, such as the sluggish electrocatalytic kinetics and inferior cycleability at the air cathode side, inevitable volatilization and CO2 poisoning of alkaline electrolyte, and dendrite formation and side reactions at Zn anode side. In this thesis, the primary efforts have been paid to showcase the performance optimization through nanostructure engineering on metal-based electrocatalyst and understand their electrochemical behavior as well as the corresponding structural evolution under rechargeable Zn-air battery operation. In the first work, based on the proposed design principles regarding the accessibility and efficiency of active sties in electrocatalyst, a hierarchical porous double-shelled spinel Co3O4 with controllable Mg substitution is designed and synthesized via an in-situ coordinating process. These morphology and composition features are validated by microscopic and structural characterizations. The hierarchical porosity is capable to optimize the availability of active sites and broaden mass diffusion channels. Meanwhile, Mg substitution is beneficial to increase the overall electrical conductivity and tailor the lattice alkalinity (i.e. the hydroxyl concentration within lattice). Specifically, the substituted Mg is considered to induce the creation of buffer zones within lattice of electrocatalyst, which can promote hydroxyl detachment from nearby catalytic sites. As a result, the catalytic site accessibility and intrinsic activity of multi-shelled materials are both increased. The electrochemical measurements confirm the performance merits of such electrocatalyst in the comparison with the limited porous or Mg-free counterparts. The second work is regarding the synthesis of a Co-Fe containing bimetal nitride with a morphology of hollow nanocuboid. Benefiting from its morphological and conductive merits, at the raw state, it exhibits battery parameters that are comparable to the noble-metal benchmark. Then, a notable maturation process is further demonstrated with performance increments in power density and discharge-charge voltage gap within the initial several cycles. By means of time-resolved X-ray and electron spectroscopic analyses, its actual configuration and structural evolution during the maturation period is visualized, and a concept of “dynamic electrocatalyst” is proposed. The battery cycling is a dynamic process for such bimetal nitride, including the gradual establishment of a “shell-bulk” configuration and periodic valence variation of Co, which is responsible for the performance improvement and stabilization during long-term cycling. Thirdly, with the knowledge gained from the metal nitrides, a Ni-Fe diselenide with a nanobox morphology is prepared as another demonstration for “dynamic electrocatalyst”. Besides the metal cations, the electrochemical evolution of Se is also recorded by operando measurements. As shown, an amorphous phase is generated along with decreased diselenide feature during the maturation process, and hence the “shell-bulk” configuration is also established for this diselenide. Within this amorphous shell, the periodic valent variation of Ni is observed and identified as the electrocatalytic active sites, while Fe exhibits inert response to electrochemical condition and maintains its chemical state. More importantly, the oxidation of Se is also monitored on the surface without generation of any other new species. The positive effect of Se on the battery performance is clearly demonstrated and considered as the key in the comparison with the alloy-based counterpart. In summary, this thesis presents three types of metal-based oxygen electrocatalysts with different nanostructures for rechargeable Zn-air battery. By taking advantages of advanced characterization techniques, new insights are provided herein to confirm their morphology features, isolate the active site, identify the actual configuration, and understand their electrochemical behavior. On the basis of these results, some novel design blueprints for electrocatalyst may be inspired to drive the development of rechargeable Zn-air battery into a practical era.