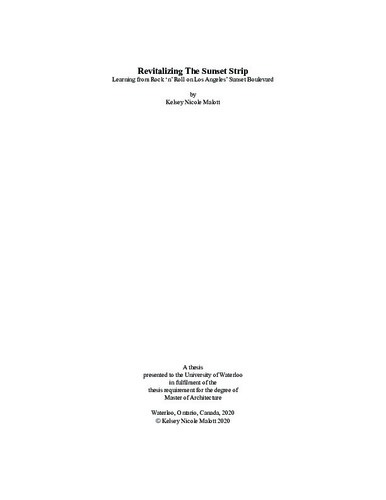 Since the set-up of major motion-picture productions, Los Angeles County has been regarded as the entertainment capital, with West Hollywood at the forefront of the music industry. Beginning in the 1960s, a revitalized music scene filled the nightlife of a 1.5-mile segment of Sunset Boulevard, commonly referred to as the Sunset Strip, with Rock ‘n’ Roll. Songs written in the Hollywood Hills and first performed at Strip venues would be discovered, recorded, packaged, promoted and sold all along the same boulevard. Although this period of Rock ‘n’ Roll should be heavily criticized for its inequality in regard to gender, sexuality and race, it was through its civic purpose and integration into the local vernacular that Rock ‘n’ Roll found its success on the Sunset Strip. It encouraged the counterculture of this urban boulevard by considering the pedestrian scale and blending commercial content with Strip specific artistry. Today, as proposals for development along the Strip are submitted to the City of West Hollywood, citizens are infuriated by their lack of relevance or homogeneity to the local vernacular. What these designers are failing to realize is that successful architecture on the Sunset Strip understands the Strip’s existing environment by examining the everyday, the particularities, and the ecologies, which do not fit traditional urban tropes. This thesis investigates the key contributors to the Rock ‘n’ Roll era of the Sunset Strip’s overall success. It considers how Rock ’n’ Roll provided a foundation for the architectural and urban ecological renaissance of the Sunset Strip using the attraction of popular culture, print media, and capital flows. Building on research and previous work done by Ed Ruscha, Reyner Banham, and Robert Venturi and Denise Scott Brown this thesis will follow learning from ordinary and everyday architecture. By revisiting Reyner Banham’s The Architecture of Four Ecologies, this thesis identifies and analyzes this period of the Sunset Strip’s urban environment through the reinterpretation of three new ecologies: Billboards, Flyers, and the Musician’s City. Each ecology is accompanied by an architectural case study, and interview with a relevant Los Angeleno. These ecologies are followed by a brief note on the challenge of staying relevant in the dynamic landscape of the Sunset Strip. Through a nonjudgmental investigation, this research intends to help inspire a renewal of architectural practice out of the everyday landscape and the commercial vernacular.