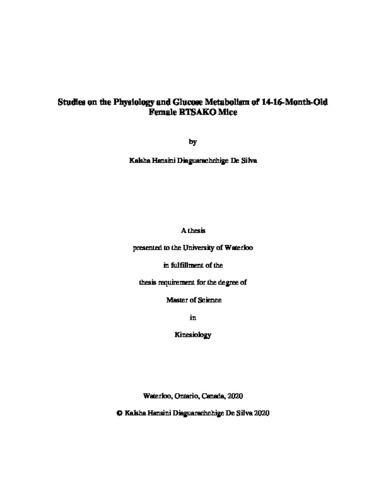 Obesity is a global epidemic. Characterized by an imbalance between energy intake and expenditure, the metabolic and physiological dysfunctions that it yields can result in other diseases such as diabetes. Although several factors play a role, ectopic lipid accumulation in organs such as the liver, heart and skeletal muscle has been found to be an intermediary between obesity and related comorbidities. However, the specific role of lipid accumulation in the kidney remains understudied, since isolated models of renal steatosis are absent from the literature. The Lipid Enzyme Discovery lab has generated a novel murine model of renal steatosis, where the first exon of the Pnpla2 gene encoding adipose triglyceride lipase has been deleted in the epithelial cells of the proximal and distal renal tubules, impairing lipolysis. In prior work by our laboratory, characterization of Renal Tubule-Specific Adipose Triglyceride Lipase Knockout (RTSAKO) mice has demonstrated a significant sexual dimorphism. In humans, females often develop the same chronic diseases as males, but with a longer latency. My work extends our laboratory’s initial findings in young mice, by studying female RTSAKO mice and their control littermates at 14-16 months of age. The following thesis contains phenotypic characterization of the female RTSAKO and control mice. Here, body and organ weights, the expression of Cre-recombinase and the presence of renal lipotoxicity or inflammation is evaluated through gene expression of various biomarkers of inflammation, fibrosis and proliferation. In addition, glycemic control is assessed though glucose and insulin tolerance testing, as well blood concentration of glucose regulating hormones were also examined. Moreover, studies on activity and energy expenditure were performed using metabolic chambers. Therefore, this thesis investigates the metabolic and physiological changes in female RTSAKO mice at a defined age of 14-16 months.