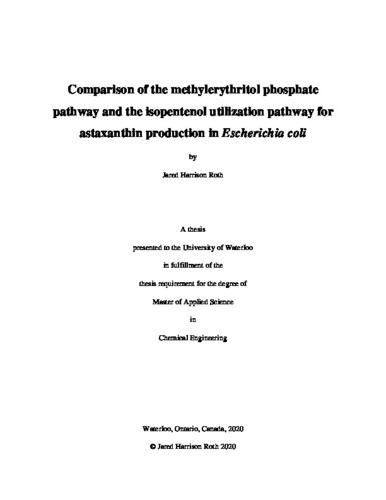 Astaxanthin is a red carotenoid belonging to the isoprenoid family of compounds. Currently, the most common method of producing astaxanthin is through chemical synthesis and natural production using Haematococcus pluvialis. However, there is an increased demand for natural pure astaxanthin, which can be achieved through heterologous production in Escherichia coli. To induce astaxanthin production, the genes ggpps, crtB, crtI, crtY, cbfd and hbfd were introduced into MG1655(DE3) E. coli in three constructs. The first used a plasmid system that constitutively expressed the genes up to β-carotene and contained two inducible operons for cbfd and hbfd expression (pAC-BETAipi/pCBFD1). The second system used a singular operon for all genes (p5T7-astaipi-ggpps), and the third contained two inducible operons and an extra copy of FPP synthase (IspA) (p5T7-lycipi-IspA/pACT7-astaipi). Each plasmid system was paired with either the wild-type methylerythritol phosphate (MEP) pathway of E. coli, an upregulated MEP pathway (trcMEP) or the isopentenol utilization pathway (IUP). Using the pAC-BETAipi/pCBFD1 system, astaxanthin production in Luria-Bertani (LB) media resulted in a moderate increase in total carotenoids with the overexpressed MEP pathway and the IUP pathway (2.7-fold over wild-type MEP for both). However, in M9 media, the strain expressing the IUP pathway improved production to 9.43 ± 2.21 mg/g dcw at 48 h, a 13.1-fold increase from the wild-type. The newly cloned plasmid systems had more modest results, yielding carotenoid contents of 3.58 ± 0.79 mg/g dcw (p5T7-astaipi-ggpps) and 3.53 ± 0.36 mg/g dcw (p5T7-lycipi-IspA/pACT7-astaipi) in M9 media. However, increasing the inducer concentration from 0.1 mM to 0.7 mM in the p5T7-astaipi-ggpps strain resulted in similar titres compared to the pAC-BETAipi/pCBFD1 system, suggesting that enzyme expression was poorly balanced in the single plasmid system. HPLC analysis determined the highest astaxanthin purity to be 63.08 ± 0.36% in the p5T7-lycipi-IspA/pACT7-astaipi system, with a significant amount of β-carotene present across all the strains, evidence of a rate-limiting step in the pathway.