E-waste in the Caribbean: Is there a potential for a circular economy? 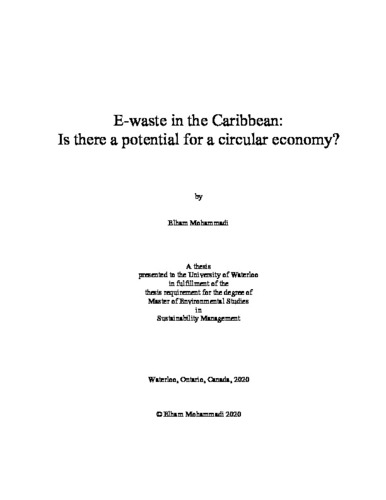 Islands are bounded systems, often plagued with several sustainability challenges of limited land and resource availability, as well as pressing waste management issues. Small island economies import most of their resource needs, which ends up as waste on the island at the end of the life cycle, representing a one-way material flow. Despite these known problems, research aiming to help develop waste management systems for small island nations is scarce, let alone for e-waste. Focusing on five Caribbean island states, this study provides the first comprehensive view of e-waste generation trends in an island context and explores the potential for a circular economy (CE). This study has two primary objectives: a) to quantify e-waste flows and accumulated stocks on the five Caribbean SIDS and b) to conduct an analysis on the economic value of e-waste being generated and the potential for a circular economy. As part of the first objective, the study estimated Electrical and Electronic Equipment (EEE) flows for the five island cases over a period of 60 years (1965-2025), including e-waste that these flows have and will generate. A dynamic material flow analysis (MFA) is used to estimate these flows and stocks for 206 product types. Then, the quantity of secondary resources within e-waste is estimated that is likely to be generated between 2020 to 2025, using the available data on material composition from the literature. In the next step, the economic value of the materials embedded in end-of-life (EoL) products is estimated. The results show that the five Caribbean islands produced significantly higher e-waste per capita per year compared to the global average of 6.1 kg/cap/year in 2016. The aggregated amount of e-waste generated per year on these five islands seems to significantly rise in the future: from 27,500 tonnes in 2010 to an estimated amount of 59,000 tonnes in 2025. This considerable estimated e-waste generation rate, when not properly managed, is not only harmful to the local environment, but also translates into considerable health impacts and loss of valuable resources. In pursuit of the second objective, closing material loops through a CE was considered to limit waste generation as well as reliance on the supply of virgin materials from outside. To test the feasibility of a CE, an analysis of the economics of e-waste on the five islands was conducted. The results reveal that, between 2020 and 2025, more than 317.4 kt of secondary materials could be recovered from EoL products. However, if these islands had started the recovery of resources in early 2001, they could gain approximately $1,430 million of economic value by the end of 2025. The economic convenience coming from the recovery of the materials embedded into the e-waste is estimated to be more than $546 million, equivalent to nearly 1% of the annual GDP of all Caribbean Community (CARICOM) countries. Different types of base, precious and rare metals can be recovered from the EoL products including: Fe (106.7 kt), Al (21.6 kt), Cu (16.7 kt), Ag (0.028 kt), Au (0.005 kt), Pd (0.001 kt); as well as plastics (84.9 kt), glasses (14.7 kt) and other materials (72.6 kt). Around 54% of the economic value would come from precious metals (Pd, Au, and Ag). For a shift towards a CE, circularity thinking will need to be embedded in policies that support efficient e-waste management systems. Planned eco-industrial parks for industrial symbiosis and resource flows among the sectors of the economy could be of great benefit. Due to economies of scale that limit smaller nations, regional co-operations would be essential for island nations that are desirous to shift to a CE.