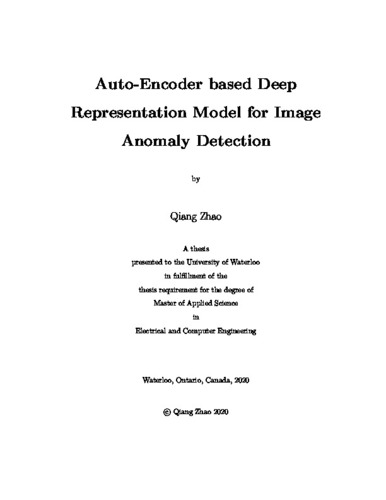 Image anomaly detection is to distinguish a small portion of images that are different from the user-defined normal ones. In this work, we focus on auto-encoders based anomaly detection models, which assess the probability of anomaly by measuring reconstruction errors. One of the critical steps in image anomaly detection is to extract robust and distinguishable representations that could separate abnormal patterns from normal ones. However, current auto-encoder based methods fail to extract such distinguishable representations because their optimization objectives are not tailored for this specific task. Besides, the architectures of those models are unable to capture features that are robust to irrelevant distortions but sensitive to abnormal patterns. In this work, two auto-encoder based models are proposed to address the aforementioned issues in optimization objectives and model architectures, respectively. The first model learns to extract distinct representations for abnormal patterns by imposing sparse regularizations on the latent space during the optimization process. This sparse regularization makes the extracted abnormal features unable to be represented as sparse as the normal ones. The second model detects abnormal patterns using Asymmetric Convolution Blocks, which strengthens the crisscross part of the convolutional kernel, making the extracted features less sensitive to geometric transformations. The experimental results demonstrate the superiority of both proposed models over other auto-encoder based anomaly detection models on popular datasets. The proposed methods could also be easily incorporated into most anomaly detection methods in a plug-and-play manner.