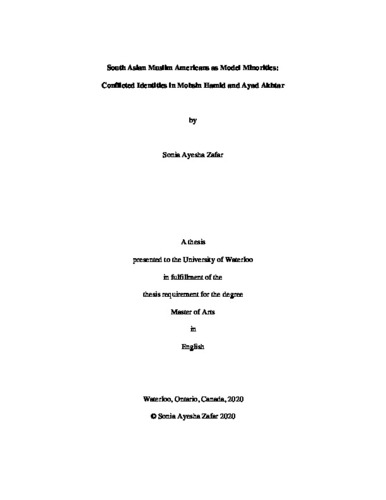 This thesis argues that Mohsin Hamid’s The Reluctant Fundamentalist and Ayad Akhtar’s Disgraced portray the struggles of South Asian Muslims in light of the model minority myth. The protagonists’ struggles for assimilation as model minorities are thwarted due to the collective social suspicion towards Muslim identities. Both of these works of diaspora post-colonial fiction are among the first prominent responses to post-9/11 American social perceptions of the Muslim diaspora. The Reluctant Fundamentalist, written in the contemporary timeline of 9/11, depicts the circumstances of the protagonist Changez in the pre- and the post-9/11 United States. Changez surrenders his efforts to assimilate as a model minority due to internal and external conflicts, including his own introspection over the social and economic disparities between the East and West, and the racial prejudice that leads to his disenchantment with America. In Disgraced, the protagonist Amir begins as a successful, assimilated model minority, a status he has achieved through a rejection of his own Muslim identity. He has, for example, changed his last name to appear of Hindu heritage to assimilate years ago and has even passed himself along at his Jewish law firm as a Hindu-American. When his Muslim identity is disclosed, his world unravels. Through the efforts of assimilation on the part of their protagonists, Hamid and Akhtar highlight how South Asian Muslims after 9/11 grapple with suspicion, scrutiny and surveillance in the US. The Reluctant Fundamentalist and Disgraced present two common options that many “model minority” South Asian Muslims in the US face when confronted with prejudice and hostility. On the one hand, assimilation looks like a retreat from Muslim identity, as epitomized by Amir’s self-loathing in Disgraced. On the other, embracing Muslim identity—and rejecting the model minority myth—risks looking like radicalization, as Changez rejects his role as a model minority and returns to his homeland as a perceived fundamentalist. These portrayals resonate with South Asian Muslims' current, ongoing pressures, and capture the dilemmas of a South Asian Muslim identity caught between these two choices, and amid extremism from both sides.