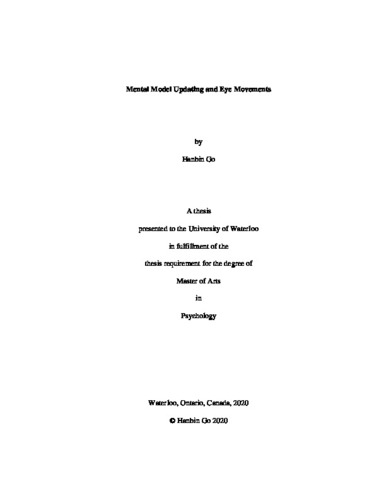 Two studies investigated what eye movements can reveal about how we process surprising information and use it to update mental models. Mental models guide our actions to make decisions in a dynamic environment. Participants made saccades to visual targets presented one at a time, radially, around an invisible perimeter, while their eyes were tracked. Target locations were normally distributed and changed at an unannounced point during the task. In Experiment 1, the distribution changed to one with non-overlapping regions of target locations. Saccadic latencies were slower when targets appeared in areas of low as opposed to high spatial probability. The length of time participants looked at targets, dwell time, increased when unexpected, low probability events occurred. In a second study, the mean of the distribution was held constant, but variance changed in three ways; a narrow-to-wide variance shift; a wide-to-narrow shift, and a no-shift condition. Hence distribution shifts were not as apparent as study 1, especially for the wide-to-narrow variance shift. Participants reported trials on which they perceived a shift in the target distribution, via a mouse click. Participants were poor at determining the distributional shifts. On trials with reported distribution change, participants dwelled on the target longer and were slower to generate saccades. When presented with a narrow-to-wide distribution shift, saccadic latencies were slower for targets from the new wide-distribution (unexpected, low probability), however, no changes were observed in dwell time, suggesting that participants deemed the highly surprising events as random noise with no predictive value for future events, and hence felt no need to update their predictive model. Results suggest that slower saccadic latency reflects surprise, whereas longer dwell time reflects updating of a mental model.