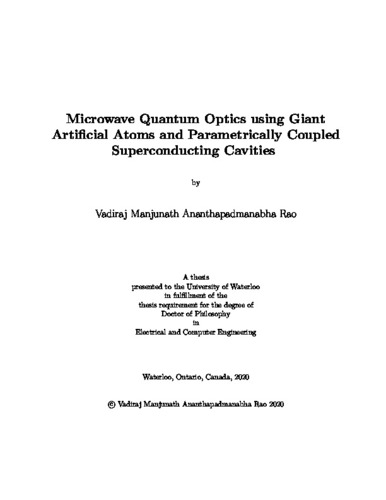 Artificially engineered atoms, built using superconducting electrical circuits, have had a broad impact on the field of quantum information and quantum computing. Based on the Josephson effect, superconducting qubits have provided a robust platform for engineering light-matter interactions at the single-photon level. The ability to precisely control and manipulate single photons using superconducting qubits and cavities, a field now popularly known as circuit quantum electrodynamics (circuit QED), has enabled new and novel regimes in quantum physics, which previously remained inaccessible. For instance, the coupling between individual photons and artificial atoms have been shown to reach the ultrastrong and deep-strong regimes, a feat which is difficult to achieve with natural atoms. The superconducting circuit platform is now a promising contender for building large-scale quantum processors, attracting large investments from academic, industry and government players. This thesis uses superconducting circuits to engineer photon interactions in two separate studies. The first is aimed at studying the physics of ``giant" artificial-atoms. The second study explores the route towards building a quantum heat engine using two parametrically-coupled, superconducting microwave cavities. We review the theoretical ideas and concepts which motivate our work, along with discussions of the design methodology, simulations, fabrication, measurement setup and the experimental findings. In the first study, we explore a giant artificial atom, formed from a transmon qubit, which is coupled to propagating microwaves at multiple points along an open transmission line. The multipoint coupling nature of the transmon allows its radiated field to interfere with itself leading to some striking ``giant" atom effects. For instance, we observe strong frequency dependent couplings of the transmon's transition levels to its electromagnetic environment, a feature which is not observed with ordinary artificial atoms. We measure large on/off ratios, as high as $380$, for the coupling rate of the $\ket{0}-\ket{1}$ transition. Furthermore, we show that we can enhance or suppress the coupling rate of the $\ket{1}-\ket{2}$ transition relative to the $\ket{0}-\ket{1}$ transition, by more than a factor of $200$. The relative modulation of the coupling rates was exploited to engineer a metastable state in the giant transmon and demonstrate electromagnetically-induced transparency (EIT), a typical signature of a lambda system. Our results show that we can transform the ladder structure of an ordinary transmon into a more interesting lambda system using a giant transmon, thereby paving the way for exploring new possibilities to study three-level physics in a waveguide-QED setting. Extending giant atom physics to multiple giant atoms, we then explore a device with two giant artificial atoms connected in a braided configuration to a transmission line. The braided topology of the qubits, offers an interesting regime where the qubits can interact with each other in a decoherence-free environment, where the interaction is mediated by virtual photons in the transmission line. We probe the resonant behavior of the qubits at two different frequency bias points, where we observe qualitatively different scattering behavior. Furthermore, when probing for the Autler-Townes Splitting (ATS), multiple resonances are observed for both resonant and off-resonant cases instead of the familiar doublet in the ATS spectroscopy. This comes as a surprise as the frequency-level spacings in both qubits are nominally identical. We believe these features could be an indication of a novel resonant interaction between the qubits facilitated by the braided topology. An effort to understand this theoretically is underway. For our second study, we explore a system with two parametrically-coupled superconducting resonators, which implements an optomechanical-like interaction in an all-electrical network. The nonlinear nature of this interaction is mediated by a superconducting quantum interference device (SQUID), where the current in one resonator couples to the photon number in the other resonator. We propose to use this system to build a ``photonic piston" engine in the quantum regime. We motivate the feasibility of the proposal by reviewing key theoretical results which demonstrate an Otto-cycle by appropriately driving the system with noise. Our experimental findings demonstrate the crucial nonlinear coupling that is required for the engine to work. We also show that we can increase the coupling strength between the resonators depending on the chosen flux operating point.