Personality Traits of GitHub Maintainers and Their Effects on Project Success 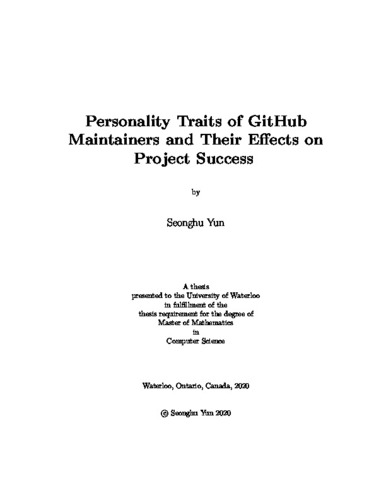 Online collaborative environments have become important virtual workplaces for developers to work on a common problem. GitHub is an example of such environment that hosts a wealth of open source software projects. Questions such as "Who contributes to successful projects?" and "What are the characteristics of lead developers?" require further investigations. We qualitatively identify 211 maintainers in 25 maintained repositories and 23 unmaintained repositories in GitHub. We measure their Big Five personality traits (Openness, Conscientiousness, Extraversion, Agreeableness, and Neuroticism) as the weighted sum of their Linguistic Inquiry and Word Count (LIWC) dimensions. Our results indicate that maintainers and non-maintainers are significantly different in virtually all personality traits except in Neuroticism. Maintainers in maintained repositories tend to be more open, but less extraverted and less agreeable than maintainers in unmaintained repositories. In addition to Agreeableness being a significant predictor, our analysis suggest that the success of a repository may be explained by the absolute differences in personality traits between maintainers and non-maintainers. In sum, our work aims to understand the role of a maintainer and the effects of personality traits on project success. Our findings have direct implications such that developers can be more cognizant of their behaviours, as well as their colleagues, which can result in better collaboration. By highlighting personality differences, we show that studying social and psychological constructs can be invaluable in understanding group dynamics during collaborative process.