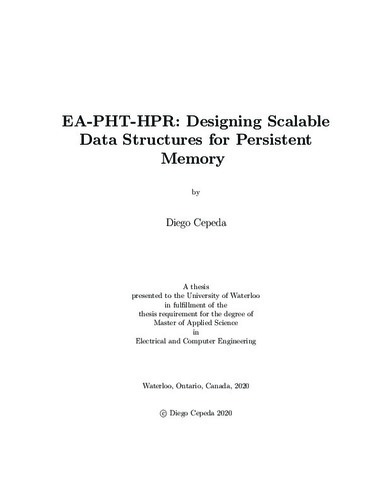 Volatile memory has dominated the realm of main memory on servers and computers for a long time. In 2019, Intel released to the public the Optane data center persistent memory modules (DCPMM). These devices offer the capacity and persistence of block devices while providing the byte addressability and low latency of DRAM devices. The introduction of this technology now allows programmers to develop data structures that can remain in main memory across crashes and power failures. Implementing recoverable code is not an easy task, and adds a new degree of complexity to how we develop and prove the correctness of code. This thesis explores the different approaches that have been taken for the development of persistent data structures, specifically for hash tables. The work presents an iterative process for the development of a persistent hash table. The proposed designs are based on a previously implemented DRAM design. We intend for the design of the hash table to remain similar to its original DRAM design while achieving high performance and scalability in persistent memory. Through each step of the iterative process, the proposed design's weak points are identified, and the implementations are compared to current state-of-the-art persistent hash tables. The final proposed design consists of a hybrid hash table implementation that achieves up to 47% higher performance in write-heavy workloads, and up to 19% higher performance in read-only workloads in comparison to the dynamic and scalable hashing (DASH) implementation, which currently is one of the fastest hash tables for persistent memory. As well, to reduce the latency of a full table resize operation, the proposed design incorporates a new full table resize mechanism that takes advantage of parallelization.