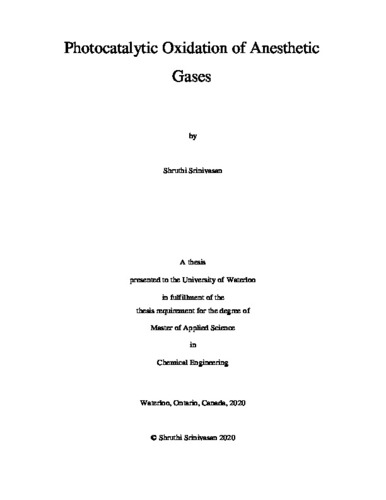 Inhaled anesthetics used in surgeries are typically volatile halogenated hydrocarbons. In a typical situation only 5% of the administered anesthetic is metabolized by the human body, while the remaining 95% is exhaled through the ventilation systems eventually into the environment as it is. The anesthetics contribute to global warming and stratospheric ozone depletion. This research focuses on using advanced oxidation processes as a treatment system for the common anesthetic gases namely Halothane, Sevoflurane and Isoflurane. The first step was to determine an appropriate reactor setup which could contain the light source and the catalyst medium with an accessible sampling port. The loss of anesthetic gas due to leaks and wall effects were measured and considered to be a baseline for further tests. In developing a treatment system, UV-photolysis, UV-ozonation, and UV-photocatalysis were tested in different batch experiments using Halothane, and UV-photocatalysis was found to be the most effectiveadvanced oxidation process among the ones tested. Since UV-photocatalysis was efficient in degrading ~ 99.9 % of the anesthetic gas in 20 min, the influence of several parameters such as the type of catalyst, the type of catalyst support surface, the catalyst loading, the incident light wavelength, the power of the incident light, catalyst surface area illuminated, inlet reactant concentration and the moisture content on the degradation efficiency of UV-photocatalysis was tested. Based on the results obtained UV-photocatalysis with the appropriate conditions was used to test the degradation of Isoflurane and Sevoflurane. The post oxidation contents of the reactor with Isoflurane and Sevoflurane were measured using Ion Chromatography for their anion concentration and a possible degradation mechanism was suggested for their photocatalytic degradation in the presence of TiO2.