Crafting the Modern Woman in Azerbaijan: Muslim Women, the State, and Modernity, 1900–1939 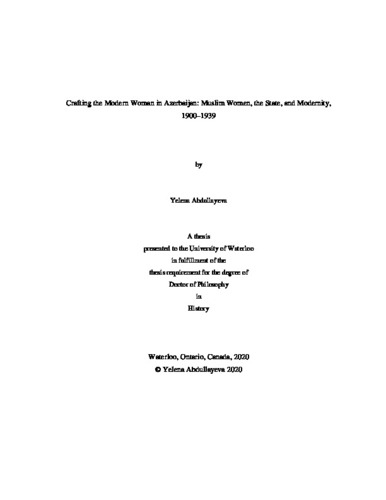 This study examines the little-known history of cultural transformation initiated by Azerbaijani reformers between the 1850s and 1930s. Relying on a unique body of sources, which include handwritten manuscripts, literary works, unpublished memoirs, periodicals, correspondence, and political parties’ records, the research explores the new cultural settings that emerged after the incorporation of Azerbaijan into the Russian empire. New means of communication and new types of sociability, in a global context of urbanization and cosmopolitanization, gave rise to secular modernist reformers and empowered both European-educated Azeri male and female elites to express modern ideas on public education and gender roles. The introduction of secular education for Muslim young women, initiated by modern-educated male intellectuals and industrialists, advanced a cohort of independent and publicly active Azeri women who struggled for equal rights with men. Azeri Muslim women articulated their vision of modernity in native print media and public associations established by Muslim women and for Muslim women. After the Sovietization of Azerbaijan in 1920, the native reformers continued to promote their agenda to eradicate the power of Islamic and patriarchal traditions. By participating in the new system and installing themselves as the new political and cultural elite, the Azeri reformers obtained the right to speak for the name of their community. Soviet Azeri political leaders developed their own synthesis between the Communist goals and modernizing aspirations of pre-revolution reformers, introducing their own program to create a new nation, millat, and a New Woman. However, between 1929–1939, the Stalinist regime, with its new norms of socialization, education, and indoctrination, replaced all alternative cultural and political discourses.