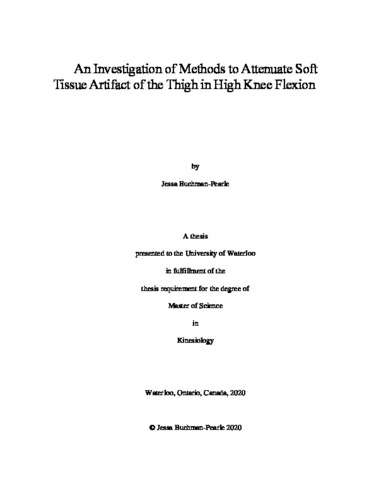 Soft tissue artifact during optical motion capture, or the movement of skin markers relative to bone, is widely accepted as a significant source of error in estimations of angles and moments. In some cases, the error associated with soft tissue movement exceeds that of the physiological motion of the joint, thereby calling into question the accuracy of the data obtained and casting doubt on the ability to determine mechanical demands of a given task. While previous studies have attempted to quantify soft tissue artifact, the variability in error with placement of skin markers (i.e. location specificity), the subject investigated (i.e. subject specificity), and the requirements of the task examined (i.e. task specificity), severely compromises the ability to develop methods which minimize and compensate for soft tissue artifact. Thus, the global objective of this thesis was to investigate soft tissue artifact of the thigh in high knee flexion movements and develop recommendations to standardize data collection and processing techniques. High knee flexion was examined because knee flexion beyond approximately 100° lacks investigation despite the unique deformation of soft tissue that occurs in this range (i.e. thigh-calf contact). Additionally, the repetitive adoption of high knee flexion is associated with knee joint injury and disease; thus, to more clearly elucidate mechanisms for these injuries and disease, improvements in the accuracy and reliability of collection and processing procedures is required. Fifty participants performed squatting and kneeling movements while motion of the pelvis and lower limb was recorded with optical motion capture and force data was synchronously recorded from four embedded force plates. Six identical rigid marker clusters were distributed on the distal and middle third of the thighs, and on the anterior, lateral, and anterolateral aspect of the thighs, while one marker cluster was adhered to the pelvis, shanks, and feet. Anthropometric measures were also taken for each subject including sex, height, mass, waist circumference, thigh length, thigh proximal, middle, and distal circumference, and thigh skinfold thickness. Data processing was divided into two studies. The first study developed a non-invasive method to estimate soft tissue artifact for each thigh marker cluster which consisted of measuring the mean of the peak difference in the hip joint center position when tracked with the pelvis cluster (i.e. the gold standard) versus each of the six thigh marker clusters. Bland-Altman methods were then utilized to compare agreement between the pelvis and thigh marker clusters for each task during maximal knee flexion. Across the tasks, the mean difference ranged from -4.93 to 0.03 cm while the lower and upper limits of agreement ranged from -11.86 to -3.27 cm and -0.87 to 5.33 cm, respectively. The mid-anterolateral cluster tended to be least susceptible to soft tissue artifact across the tasks and thus would be recommended, while the lateral clusters were most susceptible and should be avoided. Utilizing the anthropometric measures for each subject, regression models were also developed to determine the association between subject anthropometry and the mean difference in hip joint center position for each marker cluster. Ten of eighteen regression models significantly predicted soft tissue artifact with poor to moderate fit (R = 0.37 to 0.63) and explained between 14 and 40% of variation in the sample. These results suggest that while soft tissue artifact is somewhat associated with measures of anthropometry, marker placement should not be adjusted based on anthropometry alone. Additionally, negative unstandardized beta coefficients and partial correlations for thigh skinfold thickness and proximal thigh circumference revealed that adipose tissue may act to dampen artifact resulting from muscular contractions. The second study evaluated the difference in peak knee joint angles and moments between the thigh marker clusters and assessed the ability of global optimization, implemented in Visual3D utilizing IK constraints, to increase precision and reliability between marker clusters. Without global optimization, there were significant differences in estimated angles and moments between the marker clusters, wherein the mean difference was up to 8.9° and 0.6 %BW*H for flexion, 5.2° and 1.0 %BW*H for abduction, 4.9° and 0.7 %BW*H for adduction, 7.5° and 0.1 %BW*H external rotation, and 9.5° and 0.1 %BW*H for internal rotation. Global optimization was partially effective in compensating for differences between marker clusters in the sagittal plane (peak mean difference decreased 2.7° and 0.4 %BW*H) but less so in the frontal and transverse plane. Additionally, while global optimization decreased the partial eta squared (i.e. measure of effect of marker cluster location) for 12 of 30 outcome measures, intraclass correlation coefficients (i.e. measure of marker cluster reliability) only increased for 2 of 30 outcome measures. These findings highlight the importance of consistent marker placement for a given subject (i.e. between legs and laboratory sessions) and between subjects, as well as the need for researchers to report marker placement and all processing methods.

Jessa Buchman-Pearle (2020). An Investigation of Methods to Attenuate Soft Tissue Artifact of the Thigh in High Knee Flexion. UWSpace. http://hdl.handle.net/10012/16164