Being a South Tyrolean: Examining Identity in Conversation and Linguistic Landscapes 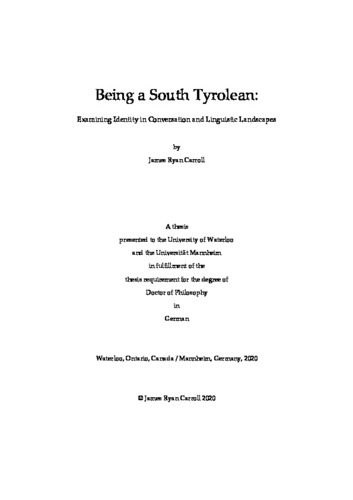 In this dissertation, I examine the role of language in the enacting of identity in the German-speaking community in the province of South Tyrol, Italy. Within this province on the border between Austria and Italy, the languages of German, Italian, and Ladin are recognized as official languages, and the vast majority of the population there is multilingual. Group and cultural identities in this province are strongly connected to language. Despite the close proximity of these language groups, there is relatively little mixing between them. This dissertation focuses on the German-speaking community in South Tyrol and examines conversation and publicly-displayed signs in order to offer a better understanding of how this community enacts and negotiates these identities. I follow Zimmerman’s (1998) approach to identity, which holds that how identities are made relevant in a particular stretch of talk-in-interaction can reveal information about the interlocutors’ “transportable identities” and the larger social order. Blommaert (2005) echoes this notion, arguing that identities extend beyond the practices that both construct them and are influenced by them. Using this methodological approach, I use both interactional data from interviews with German-speaking South Tyroleans and the linguistic practices found in the linguistic landscape of South Tyrol to examine aspects of identity. Using the evidence found in these two data sets, I show that broader Discourses (Gee, 2014) can be found in these examples of day-to-day interactions and practices. Using the tools of interactional linguistics, I analyze transcribed interview data to show how my interview participants construct membership categories for the food traditions and the geography of South Tyrol. For these participants, “being South Tyrolean” is something that is greater than the sum of the parts, as well as contradictory at times. I show through selected examples from the linguistic landscape of South Tyrol how an official Discourse is displayed and reinforced on not only government-produced signs, but also on private signs. Fundamental to this Discourse is the viewpoint that the German language and language group are to be equal to the Italian language and language group, a viewpoint that has helped to protect the German language, but has also contributed to more rigid boundaries between the two groups. These Discourses can offer a more fine-grained understanding of group and cultural identities. Further, they can inform political and language policy decisions not only in the province of South Tyrol but also in the broader context of the country of Italy and the European Union.