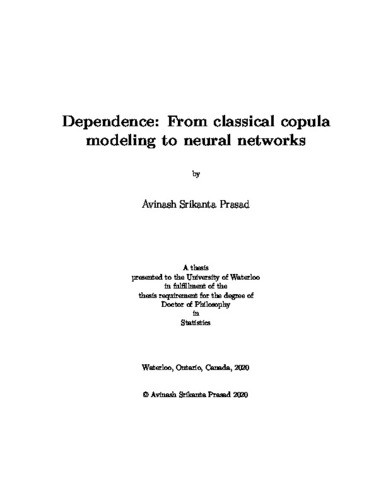 The development of tools to measure and to model dependence in high-dimensional data is of great interest in a wide range of applications including finance, risk management, bioinformatics and environmental sciences. The copula framework, which allows us to extricate the underlying dependence structure of any multivariate distribution from its univariate marginals, has garnered growing popularity over the past few decades. Within the broader context of this framework, we develop several novel statistical methods and tools for analyzing, interpreting and modeling dependence. In the first half of this thesis, we advance classical copula modeling by introducing new dependence measures and parametric dependence models. To that end, we propose a framework for quantifying dependence between random vectors. Using the notion of a collapsing function, we summarize random vectors by single random variables, referred to as collapsed random variables. In the context of this collapsing function framework, we develop various tools to characterize the dependence between random vectors including new measures of association computed from the collapsed random variables, asymptotic results required to construct confidence intervals for these measures, collapsed copulas to analytically summarize the dependence for certain collapsing functions and a graphical assessment of independence between groups of random variables. We explore several suitable collapsing functions in theoretical and empirical settings. To showcase tools derived from our framework, we present data applications in bioinformatics and finance. Furthermore, we contribute to the growing literature on parametric copula modeling by generalizing the class of Archimax copulas (AXCs) to hierarchical Archimax copulas (HAXCs). AXCs are typically used to model the dependence at non-extreme levels while accounting for any asymptotic dependence between extremes. HAXCs then enhance the flexibility of AXCs by their ability to model partial asymmetries. We explore two ways of inducing hierarchies. Furthermore, we present various examples of HAXCs along with their stochastic representations, which are used to establish corresponding sampling algorithms. While the burgeoning research on the construction of parametric copulas has yielded some powerful tools for modeling dependence, the flexibility of these models is already limited in moderately high dimensions and they can often fail to adequately characterize complex dependence structures that arise in real datasets. In the second half of this thesis, we explore utilizing generative neural networks instead of parametric dependence models. In particular, we investigate the use of a type of generative neural network known as the generative moment matching network (GMMN) for two critical dependence modeling tasks. First, we demonstrate how GMMNs can be utilized to generate quasi-random samples from a large variety of multivariate distributions. These GMMN quasi-random samples can then be used to obtain low-variance estimates of quantities of interest. Compared to classical parametric copula methods for multivariate quasi-random sampling, GMMNs provide a more flexible and universal approach. Moreover, we theoretically and numerically corroborate the variance reduction capabilities of GMMN randomized quasi-Monte Carlo estimators. Second, we propose a GMMN--GARCH approach for modeling dependent multivariate time series, where ARMA--GARCH models are utilized to capture the temporal dependence within each univariate marginal time series and GMMNs are used to model the underlying cross-sectional dependence. If the number of marginal time series is large, we embed an intermediate dimension reduction step within our framework. The primary objective of our proposed approach is to produce empirical predictive distributions (EPDs), also known as probabilistic forecasts. In turn, these EPDs are also used to forecast certain risk measures, such as value-at-risk. Furthermore, in the context of modeling yield curves and foreign exchange rate returns, we show that the flexibility of our GMMN--GARCH models leads to better EPDs and risk-measure forecasts, compared to classical copula--GARCH models.