Risk Analysis: Measures of concordance, their compatibility and capital allocation 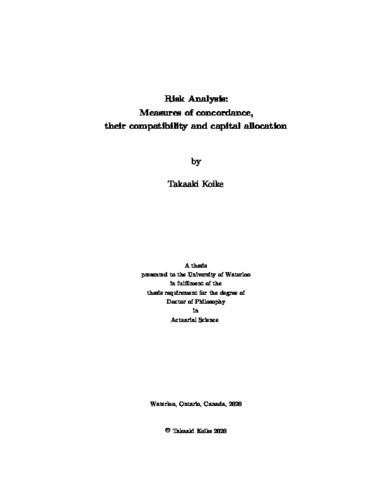 This thesis addresses various topics in the field of probability theory and statistics with applications in quantitative risk management. The first topic concerns matrix compatibility and attainability problems for measures of concordance. We characterize a class of bivariate measures of concordance arising as Pearson's correlations of random variables transformed by a so-called concordance-inducing function. This class of transformed rank correlations includes Spearman's rho, Blomqvist's beta and van der Waerden's coefficient as special cases by taking uniform, Bernoulli and normal distributions as concordance-inducing functions, respectively. For multivariate random vectors, the correlation-based measures are extended as square matrices with entries given by the bivariate measures. We study compatibility and attainability problems for such measures, which ask whether a given square matrix can be realized as a matrix of pairwise measures of concordance for some random vector, and how such a random vector can be constructed. Dimension reduction of compatibility and attainability for block matrices is also studied. The second topic of this thesis is estimating and comparing transformed rank correlation coefficients. We propose a novel framework for comparing transformed rank correlations in terms of the asymptotic variance of their canonical estimators. A general criterion derived from this framework is that concordance-inducing functions with smaller variances of squared random variables are more preferable. In particular, we show that Blomqvist's beta attains the optimal asymptotic variance and Spearman's rho outperforms van der Waerden's coefficient. We also find that the optimal bounds of the asymptotic variance are attained by Kendall's tau. The third topic of this thesis is to efficiently estimate risk allocations, which is known to be challenging due to their rare-event nature. We first focus on the problem of estimating Value-at-Risk (VaR) contributions derived by the Euler principle, and propose a novel framework of their estimation by using Markov chain Monte Carlo (MCMC) methods. We prove consistency and asymptotic normality of the proposed estimators under certain assumptions on the underlying marginal and copula densities. The framework of estimating VaR contributions with MCMC methods is then extended to the estimation of wider class of the systemic risk measures and risk allocations whose jth component can be written as a risk measure of the jth conditional marginal loss distribution given the so-called crisis event. Improved sample efficiency of our MCMC estimators is expected since they consist of samples from the conditional loss distribution given the rare event of interest whereas existing estimators are constructed by first simulating the unconditional loss distribution and then extracting the samples satisfying the rare event condition. In a series of numerical experiments, we demonstrate that biases and mean squared errors for our MCMC estimators are reduced in comparison to existing estimators. The last topic of this thesis is to investigate the conditional distribution of a loss random vector given that the aggregate loss equals an exogenously provided capital. This conditional distribution serves as a building block for calculating risk allocations such as such as VaR contributions. A superlevel set of this conditional distribution can be interpreted as a set of severe and plausible stress scenarios the given capital is supposed to cover. We show that various distributional properties of this conditional distribution are inherited from those of the underlying joint loss distribution. Among these properties, we find that modality of the conditional distribution is an important feature in risk profile related to the number of risky scenarios likely to occur in a stressed situation. Under unimodality, we study a novel risk allocation method called maximum likelihood allocation (MLA), defined as the mode of the conditional distribution given the total capital. Under multimodality, a single vector of allocations can be less sound. To overcome this issue, we investigate the so-called multimodalty adjustment to increasing the soundness of risk allocations. Properties of the conditional distribution, MLA and multimodality adjustment are demonstrated in numerical experiments. In particular, we observe that negative dependence among losses typically leads to multimodality, and thus to multiple risky scenarios and higher multimodality adjustment.