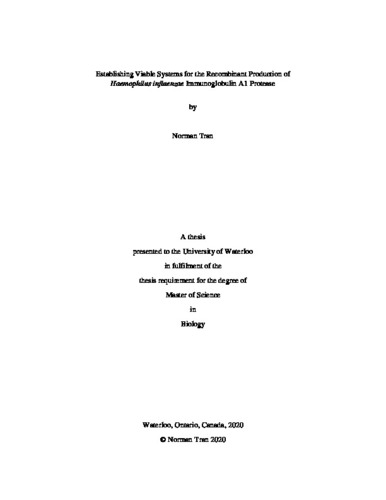 Immunoglobulin A1 proteases (IgAPs) are a family of enzymatic virulence factors secreted from a wide variety of pathogenic bacteria known to infect human mucosal surfaces. Once secreted, IgAPs cleave and inactivate the predominant mucosal antibody, immunoglobulin A1 (IgA1), to hinder the host’s adaptive immune response. As such, these enzymes are heavily implicated in these species’ pathogenicities. Efforts are therefore underway to understand how IgAPs select for and cleave IgA1 to aid in the development of drugs to treat bacterial lower respiratory tract infections, among other clinical and biochemical applications. The IgAP secreted from Haemophilus influenzae is of particular interest due to its high specificity for IgA1. Since its crystal structure was solved over a decade ago, there has been slow progress in uncovering its mechanism of substrate recognition and the structure-function relationships underlying these mechanisms. This has been due in part to problems that arise from transitioning the protein expression system from that in the native host, H. influenzae, to one more amenable to large-scale enzyme production. To this end, my thesis details the successful development and verification of two H. influenzae IgAP expression and purification systems, one in Pichia pastoris and the other in Escherichia coli. With these new enzyme sources, future studies can take a deeper dive into the biochemical intricacies of the H. influenzae IgAP, with the hope of making advances in clinical medicine.