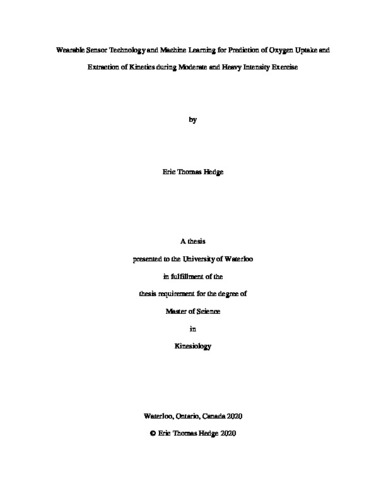 The speed at which pulmonary oxygen uptake (V̇O2p) responds to a change in energetic demand provides information about an individual’s health and functional capabilities. Advances in wearable sensor technology and machine learning coupled with a novel frequency domain analysis technique (mean normalized gain, MNG) have enabled V̇O2p kinetics to be assessed outside the confines of the laboratory setting. However, the validated V̇O2p prediction algorithm and MNG were only used to predict and extract an indicator of V̇O2p kinetics from low to moderate intensity exercise responses. Therefore, the purpose of this thesis was to investigate if a model based on the previously validated moderate intensity V̇O2p prediction algorithm, and MNG, are appropriate for heavy intensity exercise, where exercise response dynamics are more complex. In order to accomplish this, two studies were conducted. The first study used moderate and heavy pseudorandom binary sequence (PRBS) and constant work rate exercise responses to evaluate the validity of MNG as an indicator of kinetics during heavy intensity exercise. Differences in MNG were detected between moderate and heavy exercise, and strong negative within- and between-participant correlations were observed between MNG and the conventional time domain indicator of kinetics, τ. This indicated that MNG is an accurate indicator of V̇O2p kinetics during heavy exercise. The second study used both moderate and heavy exercise responses to develop a new machine learning algorithm, based on the previously validated moderate exercise algorithm, to predict V̇O2p from easy-to-obtain wearable sensor data. The new model differed from the previously validated algorithm as a result of including the more complex heavy intensity exercise responses in the training dataset. The new model’s ability to accurately predict dynamic V̇O2p responses was evaluated during different intensity PRBS exercise. The prediction algorithm was accurate at estimating absolute V̇O2p based on repeated measures correlation and repeated measures Bland-Altman analysis of the predicted versus measured V̇O2p when all exercise conditions’ data were combined. However, the algorithm was biased to predicting slower V̇O2p kinetics, as determined by the MNG method, and only a moderate positive within-participant correlation was observed between the predicted and measured kinetics. This suggests that the previously validated model architecture for V̇O2p prediction during moderate intensity exercise is not easily generalizable to include heavy intensity exercise. Therefore, new machine learning models should be explored in order to improve the prediction of heavy dynamic V̇O2p responses, and to unlock the full potential of frequency domain analysis as a tool for field evaluation of V̇O2p kinetics across a wide range of intensities.