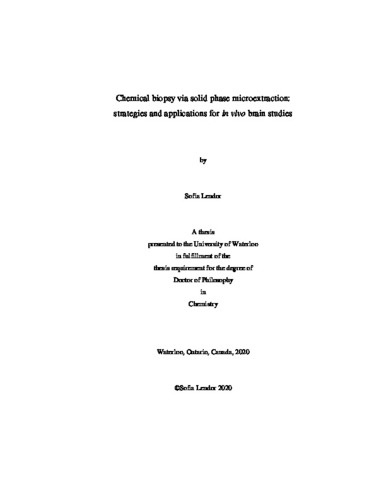 Adequate and quantitative observation of neurochemical phenomena is instrumental in guiding efforts towards a better understanding of the mechanisms underlying brain functions. Although a plethora of highly focused mechanistic studies have been conducted to unravel or approximate the cause-result relationships of brain activities, the scattered pieces of fragmentary information often fail to consolidate into a holistic picture of brain’s functional organization. Therefore, basic and applied brain research continues, powered by an explosive expansion of integrated initiatives and techniques continuously advancing the existing pool of knowledge. In vivo neurochemical monitoring in model organisms represents an invaluable strategy for capture of dynamic events or neural communication and the physiological state of the brain’s chemical environment at homeostasis (or purposefully dysregulated). However, it also remains technically and experimentally challenging due to many restrictions regarding the choice of subjects, target analytes and the opportunity to reproduce or repeat the experiments in the future, as well as suitability and performance of existing in vivo techniques. Solid phase microextraction (SPME) has inhabited the analytical chemistry landscape for several decades, however the progressing understanding of the microextraction phenomena applied to dynamic systems with minimal disturbance has only recently received recognition in the field of in vivo monitoring and granted the opportunity for SPME to grow beyond the proof-of-principle area. The chemical biopsy operation mode of this technique ensures that no tissue is removed or collected during the integrated sampling and analyte isolation step. The diffusion-based extraction of negligible amounts of an analyte from its unbound pool by the biocompatible probe spares the sampled system from drastic physiological re-adjustments to replenish its metabolites, and the binding to matrix components remains largely unchanged. These features, in principle, minimize disturbances to the studied system, making the in vivo results a close representation of its physiological state at the time of sampling. The work presented in this thesis capitalizes on these features and aims at critical stress-testing of SPME in several studies involving diverse instrumental modes and scientific questions, with the in vivo neurochemical analysis of small molecules as the common theme. One prerequisite for understanding neuronal communication and circuitry is the ability to dynamically measure concentrations of neurotransmitters in multiple brain regions simultaneously. This goal has been addressed by development of a miniaturized SPME-based probe, specialized for extraction of small hydrophilic molecules via synthesis and functionalization of the SPME extracting phase. The protocol for integrated in vivo sampling/sample preparation followed by LC-MS/MS analysis has been thoroughly characterized with respect to probe shape, desorption solvent, storage strategy, quantitative performance, and the balance between temporal resolution and sensitivity. The resulting tool and workflow were subsequently applied to the simultaneous electrophysiology-guided measurement of several neurotransmitters in three areas belonging to the fronto-striatal network in behaving macaques. The results indicated realistic prospect and capability of this approach to distinguish chemical fingerprints of different behavioral or pharmacologically induced brain activation states. The linkage of molecular information with its spatial distribution in such complex system as the brain has been the aim of coupling SPME to desorption electrospray ionization mass spectrometry (DESI-MS) to yield a platform for unidimensional, spatially resolved analysis with quantitative capabilities. The work documents the development of a hardware interface for the coupling, and evaluation of the experimental protocol through quantitative reconstruction of the laminar and radial concentration gradients of xenobiotics introduced in multilayer gel arrangements and surrogate brain tissue models. Adequate quantitative results were achieved by proposing a novel strategy that combined signal correction via preloading of internal standard onto SPME probes and signal integration in scan-by-scan mode. The proposed approach allowed for fast and minimally-invasive probing and imaging of three-dimensional objects without the need for their slicing, allowing for in vivo applications with reduced number of required probe insertions, relative to SPME-LC-MS approach, in order to obtain information about analyte distribution with sub-millimeter resolution. The culmination of the outlined strategies is subsequently illustrated by the development and in vivo application of a protocol for quantitative and spatially resolved analysis of a xenobiotic and its metabolites in rodent brain, tailored for characterization of local drug delivery via stimuli-responsive drug-loaded nanoparticles which release their cargo focally upon application of focused ultrasound. The presented data illustrate an SPME methodology capable of monitoring pharmacokinetics of ketamine and its metabolites in the infralimbic region of the medial prefrontal cortex in vivo after systemic administration of the drug. The space-resolved component of this study further explores the SPME-DESI-MS in terms of fundamental phenomena pertaining to the properties of the extractive substrate, interactions with microdroplet-based DESI mechanism and the resulting method performance. This work results in the first instance of unidimensional molecular imaging applied in vivo with subsequent LC-MS cross-validation. Due to the high energy demand of brain and its vulnerability to metabolic stress, many neuronal properties expected to be valid in physiological conditions cannot be reliably inferred from in vitro experiments. The importance of in vivo studies is herein emphasized by investigation of changes in brain neurochemistry occurring immediately and shortly after death. The broad analyte coverage characteristic for SPME and untargeted analysis mode enabled by MS have been combined to determine death-induced changes affecting rat hippocampus in the first hour of postmortem interval (PMI). Significant changes in brain neurochemistry were found to occur as soon as 30 min after death, further progressing with increasing PMI, evidenced by relative changes in levels of metabolites and lipids. These included metabolic intermediates, signalling molecules, and inflammatory mediators. Additionally, thorough analysis of interindividual variability in response to death provided insights into how this aspect can obscure conclusions drawn from an untargeted study at single metabolite and pathway level.