An Exploration of the Correlates and Causes of Boredom 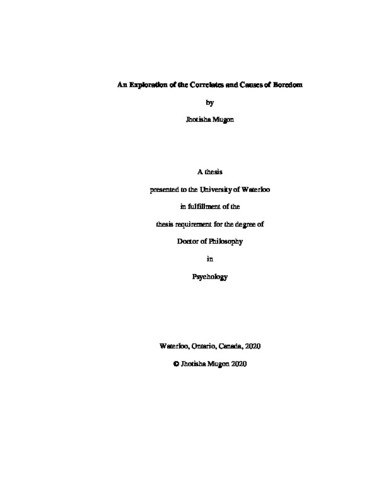 Boredom has been defined as self-regulatory signal which tells us that whatever we are currently doing is failing to keep us engaged, pushing us to seek out more satisfying alternatives. It is a negatively valenced experience associated with a wide range of negative consequences ranging from problem gambling to depression and poor academic performance. The pervasiveness of boredom points to the need to better understand the various contingencies that lead to it. As such, the goal of this thesis was to explore some of the lesser studied correlates and causes of boredom. Chapter 2 explored the relationship between boredom and willingness to engage in various tasks. Results showed that the less willing one is to engage in a task, the more bored they are likely to be. Chapter 3 investigated the relationship between boredom and effort regulation with results indicating that those who are less willing to expend effort are more likely to be bored. Chapter 4 examined the role of autonomy on boredom and demonstrated that control by itself does not differentiate between different levels of state boredom when tasks are boring. Finally, Chapter 5 explored whether having control over the challenge level of a task influenced boredom. Here too, results showed that the different manipulations of control over challenge did not influence boredom. The challenge of isolating individual factors that lead to boredom, highlighted across all the studies presented here, suggests that boredom arises from complex interactions of multiple variables. The last chapter discusses the possible interactions that can give rise to boredom.