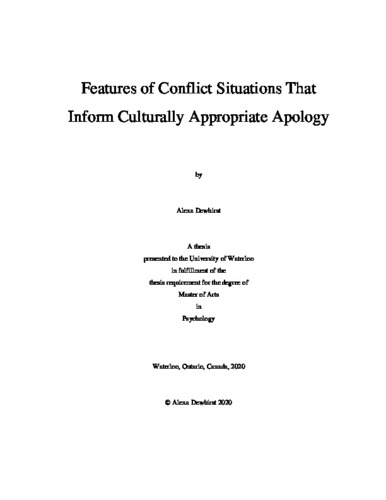 Commerce occurs globally, to remain competitive businesses need to effectively manage their international relationships which can be threatened by cultural differences (Bercovich & Elgstrom, 2001). The following research examined the relationship repair process in negotiation across cultures, focusing on how perceptions of conflict situations influence relationship repair strategies. This study compared the apology preferences of Chinese and White North Americans in negotiation settings. Following theory by Ren and Gray (2009), we proposed a normative model of apology preference across cultures that is informed by communication styles, causal attributions, and face concern. We proposed that culturally embedded causal attributions inform victim face concern. The victim’s level of subsequent self, other and mutual face concern predict preference for apology style during restoration. We theorized that culturally normative communication styles, such as direct versus indirect communication, hold embedded meaning that delineate different levels of responsibility taking and politeness. Results provided evidence for the influence of culture in the relationship repair process. We found that face concern mediated the relationship between culture and relationship repair. We did not find evidence that culture impacts responsibility attributions, or prescribes apology appropriateness through communication norms. Instead we found that all participants that received a direct apology reported significantly higher forgiveness across all cultures. Participants that reported high self-face concern following a conflict, who then received a direct apology, reported significantly higher perceptions of apology efficacy. These findings suggest that conflict situations may threaten victim perceptions of social image (face), and for the relationship to be restored, social image must be directly repaired by the transgressor.