Changes in Gill Physiology and Energy Requirements of Darter Species (Etheostoma spp.) due to Effluent in the Grand River 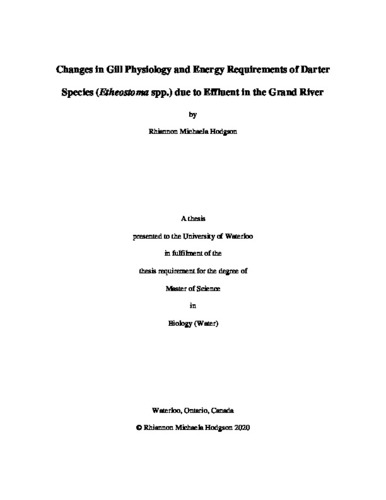 The effluent from municipal wastewater treatment plants is a major point source of contamination in Canadian waterways. Improvement of effluent quality to reduce contaminants like pharmaceuticals and personal care products, natural and synthetic hormones, metals, or pesticides before being released into the environment is necessary to reduce the impacts on organisms that live in the river downstream. This thesis aims to characterize the metabolic and gill physiological responses of rainbow (Etheostoma caeruleum), fantail (Etheostoma flabellare), and greenside (Etheostoma blennioides) darters to the effluent in the Grand River downstream from the recently upgraded Waterloo municipal wastewater treatment plant. In the summer and fall of 2019, metabolism measurements of darters were recorded using a portable field respirometry system to collect data on the energetic costs associated with living in effluent contaminated water. Additionally, body measurements were recorded for overall health assessment. The gills of darters were sampled in fall 2013/2014, fall 2018 and summer of 2019 for histological and molecular analysis to determine changes in morphology and function, which may indicate disruption to the key homeostatic functions of the gill (oxy- and ionoregulation). Collection of water samples along the Grand River showed measurable amounts of contaminants and compounds downstream from the MWWTP that are of concern such as ammonia, carbamazepine, venlafaxine and diclofenac and their metabolites. Additionally, the physicochemical water properties are altered (i.e. dissolved oxygen, conductivity and pH). Some fishes showed evidence of growing longer and with increased mass than fish from the reference site. The routine metabolism of darters was not affected by effluent exposure, but some species had increased maximum metabolic rates leading to an increased aerobic scope. Gill samples from effluent exposed fishes showed evidence of more pathologies and variation in morphology; additionally, the gene expression of key ion regulating proteins were altered. Field research provides information on the direct environmental response of fishes to contaminants in real time. The importance of considering interspecies differences are highlighted, due to the variances in darter responses across the three species. The results suggest that darters can metabolically adjust to effluent contaminated water and may also be adapting to the urban and agricultural inputs. The modification and damage to the gills provides a useful water quality indicator but does not necessarily reflect how well acclimated the species is to the environment due to a lack of evidence of poor fish health.

Rhiannon Hodgson (2020). Changes in Gill Physiology and Energy Requirements of Darter Species (Etheostoma spp.) due to Effluent in the Grand River. UWSpace. http://hdl.handle.net/10012/16129