Effects of Incentives on Group Problem Solving Processes and Paths 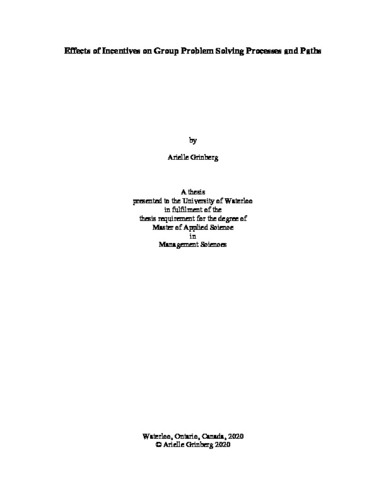 Incentives have been known to affect group performance when solving complex problems. Groups that are given individual incentives for solving problems are able to solve problems quicker, and with less errors compared to those that are given group incentives. However, much is unknown about the underlying cognitive and social factors that influence problem solving in conjunction with incentives. Research has neglected to investigate the process by which groups move from an initial problem state to the solution state. There is a heavy involvement of coordination between members, even between a heterogeneous group where members have their own individual goals. Groups must first agree upon a solution, or goal state, and members must solve their own sub-goals in conjunction with one another to ensure there is no conflict or overlap. This research explores the different routes that groups with varying incentive structures take when solving a complex problem. A previous study was analyzed where groups were given four cards with pictorial items and each member was asked to collect four of a kind. The study revealed that the most complex condition, detour and restructuring, showed the largest differences between incentive groups. In this condition participants could fall into blind alley categories, and must detour around these false sets in order to reach the correct solution. The solution also consisted of three similar pictorial items and one superordinate item, requiring participants to cognitively restructure their perception of the category sets. Thematic coding was done on transcripts of the experimental videos, and differences between groups were analyzed. Additional analysis was also conducted on the way each group organized their solution paths by investigating the order of category labels that groups would produce. Results showed that groups given individual incentives had much more organized paths, were less willing to explore the problem space, and had a better understanding of problem structure compared to groups given a group incentive. Individual incentive groups were also more likely to move directly towards the solution, and spend less time creating category labels for incorrect category solutions. Overall, these results contribute to the problem solving research field by establishing that the behaviours and characteristics of groups solving complex problem vary not only on internal factors, such as personality type and expertise, but also based on external factors, such as incentive types.