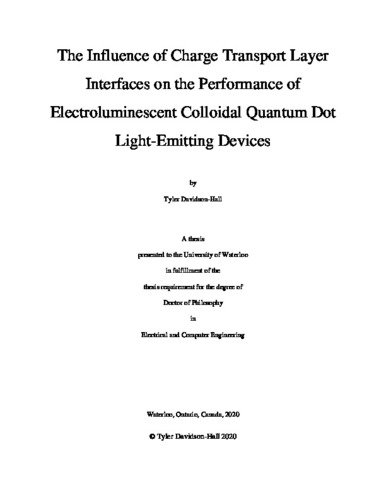 Electroluminescent quantum dot light-emitting devices (QDLEDs) are a relatively new technology for displays that have all of the benefits of emissive displays commonly associated with organic light-emitting devices (OLEDs) such as low power draw, deeper black levels, and fast refresh rates. However, QD emitters confer additional valuable characteristics for displays due to their high photoluminescence quantum yield (PLQY) approaching 100%, narrow emission full-width at half maximum (FWHM < 20 nm), the tunability of their peak luminescence wavelengths across the entire visible spectrum, and their solution-processability which makes them compatible to low-cost and flexible fabrication techniques. Unfortunately, like their organic counterpart, the long-term stability of QDLEDs has been limited for many years. While high-efficiency red and green QDLEDs have recently been demonstrated with electroluminescence lifetimes of over 1,000,000 hours, this may not be suitable for some applications given the luminance of the devices for which these lifetimes are rated. Furthermore, like OLEDs, blue QDLEDs are far less stable than red and green with the record lifetime being orders of magnitude less. Therefore, it is important to understand the mechanisms governing QDLED stability in order to improve device lifetimes. In general, the main degradation mechanism affecting QDLEDs has been attributed to multi-charge carrier interactions referred to as Auger recombination which uniquely affects QDs to a greater degree due to their nanoscale structure but also the inherent charge imbalance within QDLEDs. However, there is little focus on the degradation of devices outside of this process. Given the similarity in structure between QDLEDs and OLEDs, this work aims to elucidate upon additional degradation mechanisms that may influence the long-term stability of these devices by considering the degradation mechanisms that affect organic semiconductors. This thesis investigates each interface present within the QDLED structure to identify its influence on QDLED performance, with strategies to improve efficiency in addition to the main focus of device stability. The primary interfaces of interest occur between the electron transport layer (ETL) and the QD emission layer (EML) as well as between the QD EML and the hole transport layer (HTL). However, the interface between the HTL and the hole injection layer (HIL) will also be shown to influence the electroluminscence stability of QDLEDs despite not interacting with the QD layer directly. This work utilizes the hybrid inverted QDLED structure which consists of an inorganic ETL and an organic HTL as this structure has proven to be far superior to devices with all-organic or all-inorganic transport layers. Therefore, it is the HTL that will be of particular interest in this thesis. Red and green QDs were utilized as the EML over the course of this work, but the primary focus will be on the red QDLEDs as they resulted in the most efficient and long-lives devices allowing for a better environment in which the influence of the interfaces on QDLED performance could be evaluated. However, the results should be applicable to a wide range of QD EMLs of different colours and compositions. The role of the ETL / EML interface in QDLED performance was investigated by introducing the wide band gap work function modification layer between the two layers. While a 1.6× improvement in maximum EQE was observed, this coincided with a worsening of the charge imbalance. Rather than a result of improved charge balance, this efficiency enhancement was attributed to a reduction in QD exciton quenching by the ZnO due to the passivation of surface states at this interface. While this resulted in a negligible effect on the EL stability of these QDLEDs at the time, further experiments investigating the effect of excitons at the EML / HTL interface would identify these excitons as an issue for long-term QDLED stability. Ultimately, the main influence of the ETL / EML interface on QDLED performance lies in the exciton quenching effect of ZnO surface states which limits the QD film PLQY. The influence of the ETL and EML layers on morphological stability was investigated by a systematic study on the processing parameters of ZnO and the QDs for spherical and rod-shape QDs. The main factor determining the degree of morphological degradation in the emissive area homogeneity was the roughness of each layer. This is also a limitation in OLED morphological stability, as the organic semiconductors are prone to crystallization when deposited on rough surfaces. Therefore, although rough layers are the catalyst of this morphological instability, it is the organic HTL that is the limiting factor in long-term morphological stability. The role of degradation of the HTL on overall QDLED stability was further investigated through PL measurements from QDLEDs over time while irradiated with UV light. By measuring changes in the QD PL over time under constant UV illumination in devices with a variety of organic semiconductors, it became clear that the HTL has a significant influence over the loss in QD PLQY during aging. While the QDs individually are relatively stable during the measurement period, the PLQY loss in the QDLEDs correlated to the individual PLQY loss of the organic layers. It was therefore found that the exciton-induced degradation of the organic molecules at the QD / HTL interface that is particularly deleterious to QDLED stability. A multi-layer HTL structure was investigated in order to improve charge balance and reduce hole accumulation at the QD / HTL interface. With the optimized structure, a 25× enhancement in QDLED lifetime was observed. This HTL structure allows for the use of alternate HILs which do not damage the underlying organic layers during device fabrication, restricts the accumulation of holes at the QD / HTL interface and reduces charging of the QD layer, and limits degradation of the HTL at the QD / HTL interface. Ultimately, this work has identified and characterized a degradation mechanism affecting long-term EL stability of QDLEDs and presents a device structure which utilizes a cascading HTL with small gaps between each component’s HOMO energy level with an organic HIL minimizing the effects of this mechanism on QDLED EL stability.