The Roles of Daily and Trait Self-Compassion in Mitigating Symptoms of Bulimia Nervosa: Findings From a Two-Week Daily Diary Study 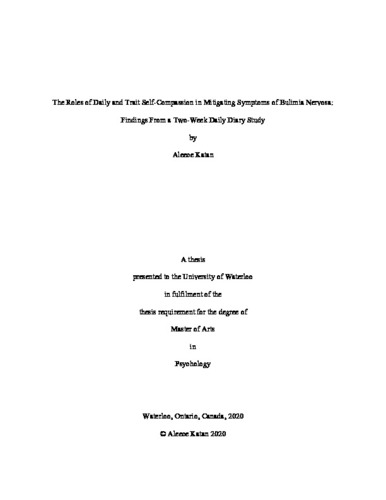 Background: For individuals with bulimia nervosa (BN), eating pathology is largely affected by daily experiences (Crosby et al., 2009). Yet, little is known about protective factors that can mitigate bulimic symptoms day-to-day within a person. Self-compassion is an efficacious strategy that mitigates eating disorder symptomology (Braun et al., 2016). While generally conceptualized as a stable trait-variable (Neff, 2003a), recent findings suggest that self-compassion levels fluctuate within women with anorexia nervosa, and that these fluctuations mitigate eating pathology (Kelly et al., 2019). Research has yet to explore whether these findings extend to individuals with BN, and whether self-compassion can assuage the behavioural symptoms of eating disorders. Objectives: The primary goals of the present study were to investigate 1) the extent to which self-compassion levels fluctuate day-to-day within women with BN; and 2) whether these fluctuations contribute to their eating pathology. Secondarily, we explored whether higher average levels of self-compassion were associated with reduced eating pathology over the study period. Method: For two weeks, 124 women who met the DSM-5 criteria for BN completed nightly measures of their daily eating pathology and self-compassion. Results: The intraclass correlation for self-compassion was .56, demonstrating that self-compassion levels varied almost as much within a person from day-to-day as from one person to the next. Multilevel modeling revealed that while higher daily and trait self-compassion were associated with lower levels of negative affect, dietary restraint, clinical impairment and bodily shame, only daily self-compassion was related to the reduced probability of binge eating and use of inappropriate compensatory behaviours. Discussion: Findings suggest that, for women with BN, responding to daily distress with more self-compassion than usual may be associated with marked reductions in both the psychosocial and behavioural symptoms of their eating disorder.