If All Else Fails ... Survival: Protect and Survive and the End of the World in Thatcherite Britain 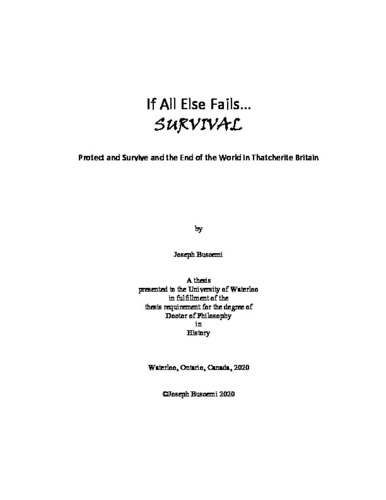 If All Else Fails… Survival, is a thorough examination of the creation of Britain’s 1980s nuclear civil defence program, Protect and Survive. The programme’s role as a significant political and cultural influence in Britain throughout the decade, and as a prominent construct of Cold War memories, are evidenced. The Conservative Party’s release of the programme was a defining moment in British history, that carries political, social, cultural, and psychological ramifications. However, this research establishes that the programme’s legacy as the creepy cartoon that advised families to hide from nuclear bombs in DIY shelters is misunderstood and oversimplified. Protect and Survive’s pragmatic simplicity (still associated with the Conservative Party) was symptomatic of a long, clandestine history of nuclear proliferation and civil defence cuts spearheaded by Labour Ministries as a means of bolstering support for the nuclear deterrent. The programme sparked concerted criticisms and its questionable efficacy was considered to be indicative of government efforts to remain a nuclear power, at the expense of public survival. The many policies, protests, and media that emanated from Protect and Survive provide unrivalled examples of discourses between governments and citizenry during the Cold War, indelibly capturing how British leaders covertly prepared themselves for the end of British civilization. Also brought to light is the unprecedented alliance between scientists, artists, doctors, Labour, academics, the CND, socialists, and Local Authorities (principally the Greater London Council) to assail the Thatcher government through the weak point of Protect and Survive’s dubious credibility. Being released in early 1980, Protect and Survive became a remarkable focal point of Thatcherite conservatism, nuclear disarmament, and British neoliberal culture at national and municipal levels. The remarkably negative public reaction to the program facilitated extraordinary debates and media on Britain’s status as a nuclear power. Also considered are the cultural and political realities of 1980s British society through the relationships between federal and municipal governments with civil defence and the protection of its citizenry. British concepts of nuclear danger are explored as well as how the fear of annihilation informed ideas of Britishness, community, mental health, class, culture, and the role of government. Also rationalized is the processes through which Protect and Survive shaped the everyday experience of British life during the Cold War as part of a complex correlation between politics and culture that was endemic within Cold War Britain.