The Fox Building the Henhouse: Corporate influence on global health governance and the risks to the World Health Organization 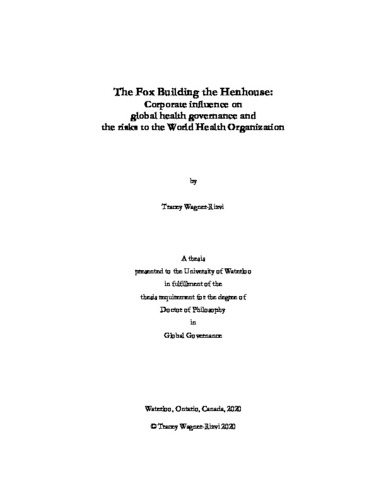 Like global governance more generally, global health governance and the global health architecture are changing and, in the process, creating new kinds of openings for non-state actors (NSAs) such as non-governmental organizations (NGOs), the private sector, and philanthropic organizations. This growing role for NSAs in global health governance has occurred at the same time as the World Health Organization (WHO) has turned to the private sector and philanthropic organizations for multistakeholder partnerships and voluntary contributions to bridge its budgetary gap due to some states capping their annual contributions. But without adequate safeguards, there is a risk that the increased influence of the private sector on global health policy-making, norm-setting and governance at the WHO can result in substantive policy shaped to prioritize profits over public interest and health outcomes. There are also risks for the WHO, as the global lead body on health, including the potential for conflicts of interest, damage to institutional reputation, and deeper reliance on private funding in ways that undermine the WHO’s mandate. This dissertation seeks to answer the following questions: 1) In what ways have profit-oriented NSAs engaged with the WHO as a site of global health governance on substantive policies and paradigms that shape policy-making? 2) What are the implications for the WHO of the agency’s enhanced engagement with the private sector? This dissertation examines these questions broadly as well as through in-depth analyses of the specific cases of the baby food and soda industries. The analysis in this dissertation finds that, despite their self-representation as trustworthy partners in addressing health issues, private sector actors have worked to influence substantive initiatives by the WHO related to the sale and consumption of their products. Private sector actors have also engaged in a long-game to shape paradigms that determine which policies are pursued and what role private actors are able to play in developing them. These paradigms create an environment conducive to companies and their associations, for example, arguing against regulation and in favour of voluntary measures and representing themselves as legitimate partners in developing health-related policy. Like other industries, the baby food and soda industries have pursued their substantive and long-term interests by drawing on a so-called “corporate playbook” of strategies and tactics to access and impact upon global health policy-making at the WHO. These strategies and tactics are iterative and mutually reinforcing. Furthermore, in its efforts to bridge its budgetary gap, the WHO has potentially set itself up for even more in-depth influence by opening itself to fuller engagement through multistakeholder arrangements and PPPs. This fuller engagement has been formalized by the WHO’s Framework of engagement with non-state actors (FENSA). Analysis of the contested development of FENSA serves to highlight the types of issues against which the WHO must guard itself if it is not to undermine the agency’s independence, integrity, credibility and mandate. Although FENSA is ostensibly intended to safeguard against potential conflicts of interest, conflating “conflict of interest” with the different but related notion of “conflicting interests” leaves the WHO vulnerable to those very conflicts of interest and can lead the agency to greater, not less, influence from profit-based actor. As it continues to adopt a multistakeholder approach and widen its engagement with NSAs in order to address its financial challenges, the WHO is potentially setting itself up for greater dependence on for-profit entities, which can lead to further conflicts of interest and erosion of the WHO’s role as lead global health body.

Tracey Wagner-Rizvi (2020). The Fox Building the Henhouse: Corporate influence on global health governance and the risks to the World Health Organization. UWSpace. http://hdl.handle.net/10012/16106