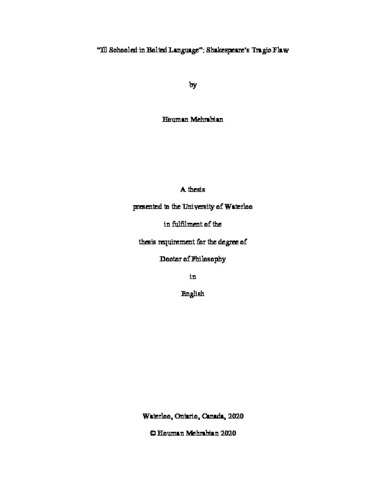 Textbooks of rhetoric emphasize the significance of taking into account the values and interests of the particular audience when designing and delivering a speech. And the breach of this requirement is grouped among the greatest “vices” of the art of rhetoric. This dissertation investigates Shakespeare’s experimentations with this rhetorical “vice” (taken to its extreme) in his tragedies. I argue that Shakespeare presents tragic protagonists who are in one way or another spectacular human beings, but who are also in one way or another irresponsible and inconsiderate of others. And the downfall of the hero is initiated by his unrhetorical dealings with the people around him—even with those who sincerely admire and celebrate him. This hubristic hamartia of the hero is indiscriminate—the hero treats friend and foe alike. I hope to show how each tragedy is a unique display of the devastating consequences of being or becoming hubristically unrhetorical. Despite all of his outstanding features, due to his rhetorical shortcomings, the hero is easily manipulated. As I will demonstrate, cautiously considering the other in social interactions shields one against being exploited by the other. The unrhetorical, that is to say, become easy prey for the rhetorically manipulative.