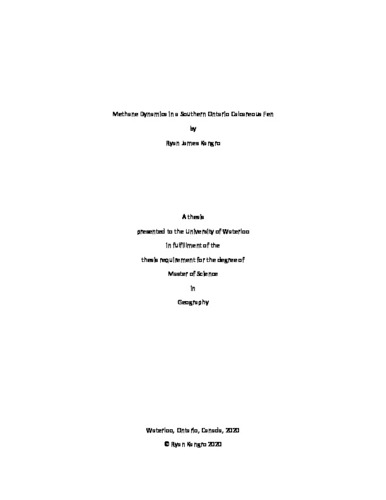 Peatlands are important ecosystems that are pivotal for the global carbon budget. They have the ability to take carbon dioxide out of the atmosphere and store it within peat, which has very slow decomposition rates. Peatlands reduce the rate of organic matter decomposition due to their saturated environments year-round. While these conditions are needed for the storage of carbon, they also result in the production of methane (CH4). CH4 emission is an important function of peatlands as it is a highly potent greenhouse gas; therefore, understanding the mechanisms behind this process is crucial. While CH4 flux has been studied for several decades in peatlands, several gaps remain due the complex relationships that exist. One of the transportation methods of CH4 (ebullition) has often been ignored and disregarded, while measurements of CH4 flux during the non-growing season also remain sparse. Additionally, it is important to further our knowledge of various environmental controls of CH4 for peatland management practices. Ebullition was captured and measured over the course of 6 months in 2019 using funnel traps. The traps were placed throughout a calcareous fen peatland in Ontario to view spatiotemporal trends. It was found that ebullition was significantly different on both a spatial and temporal scale. Ebullition was consistently the greatest in the sedge location and lowest in the willow. These differences were likely caused by differences in environmental variables such as water table and pore water CH4 concentration, as well as peat properties. The willow location had higher bulk density and lower organic matter content, which likely reduced the amount of ebullition. On a temporal scale, ebullition peaked in late July and early August. This likely occurred due to soil temperatures being the warmest during this time period. Consistent decreases in water table and atmospheric pressure were also shown to likely enhance ebullition release. In relation to chamber flux measurements over the same time, ebullition contributed 16.4% of total CH4 emissions. A greenhouse experiment was also conducted to view the effects that vascular vegetation has on ebullition. Bare, willow, and sedge cores were collected that all contained various amounts of vascular plant coverage. Ebullition was greatest in the bare cores that contained no vascular plant coverage, while ebullition was the least in the sedge cores which contained the greatest amount of biomass of Carex. Negative correlations were found between belowground biomass and pore water CH4 concentration which suggests that the presence of roots can restrict that ability for ebullition to form. While vascular plant coverage was present in the willow cores, the amount of vegetation was much less than the sedge cores and did not appear to limit ebullition in a drastic way. Ebullition from this study has been shown to release a sizable amount of CH4 that should be accounted for as well as vary on a spatiotemporal scale due to changes and differences in environmental variables and peat properties. Growing season and non-growing season CH4 fluxes were collected from 2016-2019 allowing investigation of the importance of various environmental controls (water table, soil temperature, pore water CH4 concentration and vegetation productivity). Over the course of the growing season, higher water table levels consistently resulted in greater CH4 fluxes. Additionally, on a monthly scale, CH4 fluxes were at their greatest when soil temperature was the warmest. This suggests that water table is an ideal predictor for longer temporal scales (growing season) while temperature is more appropriate on smaller temporal scales (monthly). Significant differences in CH4 fluxes were also found spatially in the growing season of 2019 which suggests that CH4 fluxes are quite variable on a spatial scale (meters) and this needs to be considered during modeling or when calculating overall carbon sequestration in a peatland. Despite only having measurements for less than half of the non-growing season, three out of the four years had non-growing season emissions surpass 15% of the growing season emissions (25.7, 7.8, 41.0, 21.9%, 2016-2019, respectively). This 15% of the growing season is an important threshold as it is typically used in replace of missing non-growing season fluxes. Having an abnormally high growing season CH4 emission does not necessarily result in an abnormally high non-growing season. This suggests that relationships between the growing season and non-growing season might be nonexistent. Non-growing season CH4 fluxes may be more accurately presented by mean measurements rather than a percentage of the growing season.