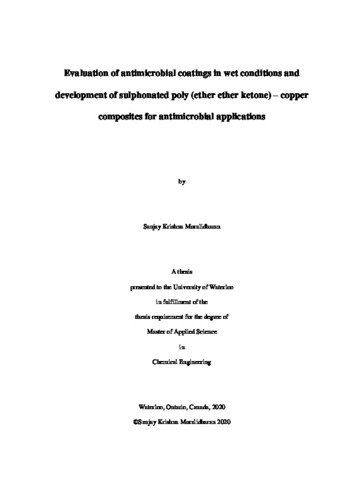 The existence of pathogenic bacteria and fungi on surfaces can be a serious threat to health causing numerous infections. With microorganisms developing antimicrobial resistance over the years, there is an increasing need to develop surfaces that can kill or inhibit the growth of bacteria and fungi. Antimicrobial coatings have been tested as an effective solution to battle hospital-acquired infections, which are one of the leading causes for patient morbidity and mortality. Aereus Technologies has been working on developing a coating consisting of marine paint and biocidal copper-alloy based microparticles that can render surfaces antimicrobial. One of the key concerns for this new coating is that the microparticles are expected to oxidize when exposed to human palm sweat or disinfection agents in healthcare settings. To investigate this possibility, the antimicrobial efficacy and durability of this coating was evaluated under exposure to different saline environments (artificial ocean water and artificial sweat environment) and a strongly oxidizing environment (hydrogen peroxide). From the experiments, it was observed that regular painted and marine painted samples with proprietary “Aereus shield” particles have the ability to survive harsh oxidizing conditions without losing their antimicrobial properties. The antimicrobial application of copper was extended to the synthesis of sulphonated poly (ether ether ketone) (SPEEK) and copper composite films as promising antimicrobial materials. The effects of fabricating surface structures (micro-pillars) on the films were investigated. The synthesized films were systematically characterized and it was observed that both SPEEK and SPEEK – Cu films possessed antimicrobial properties which initially demonstrated over 4 log reduction of E. coli within 15 minutes of contact. Over longer times as the films aged, the SPEEK – Cu film still achieved over 2 log (for flat film) and 4 log (for micro-pillared film) reduction of E. coli within 1 hour of contact and showed significant fungal growth reduction for Saccharomyces cerevisiae (yeast) and Aspergillus niger after 2 hours of contact. Micro-pillared films had a larger water contact angle (131°) in comparison to flat films (64°), indicating that they were hydrophobic. These micro-pillared films also showed better antimicrobial properties and more copper release than flat films, due to better exposure of copper particles on the top surface of the micro-pillars. The synthesized films were also thermally stable up to 300°C and exhibited tensile strengths ranging from 50 – 160 MPa depending on the surface morphology and copper content. Furthermore, the films were found to be recyclable by dissolution in sulphuric acid and re-casting to form new films with replenished sulphonic acid groups in the polymer matrix and restored antimicrobial properties.