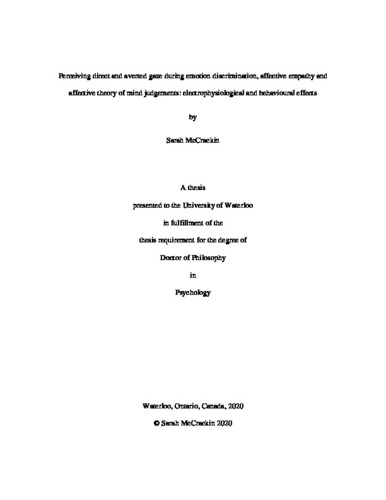 Our observations about the eye-gaze of others inform how we interact with them. Perception of direct gaze has been shown to impact emotional and self-referential processing differently than perception of averted gaze, which in turn may impact how we relate emotionally to others. However, it is still unclear how the use of eye-gaze varies depending on the type of social task being performed, and how direct and averted gaze processing vary during each task. A set of three Event-related Potential (ERP) studies investigated the time-course of direct and averted gaze perception, and the impact of gaze processing on different social and emotional abilities. In Study 1, participants were asked to use the same direct and averted gaze faces to make three kinds of discriminations based on facial cues – direction of attention discrimination from eye-gaze, emotion discrimination from facial expressions, and gender discrimination. In Studies 2 and 3, written sentences describing positive, negative, and neutral scenarios were presented before face stimuli and acted as emotional context. Participants then viewed direct and averted gaze faces of the individuals that had been described as experiencing the various scenarios. After seeing each face, participants rated their affective empathy (Study 2) for the gazer, or made affective theory of mind judgements about what the gazer was feeling (Study 3). Event-related potentials (ERP) were recorded to the onset of direct and averted gaze faces in each study, while participants performed each task. The impact of direct and averted gaze perception on behavioural performance was examined, and ERPs tracked the time-course of how direct and averted gaze perception interacted with affective task processing. A mass univariate approach was used to analyse several key components: i) the frontocentral N100 and N200, thought to reflect the initial activation of emotion areas in response to affective stimuli; ii) the face-sensitive N170, thought to reflect structural encoding of the face; iii) the EPN, thought to reflect attentional selection of motivationally relevant stimuli; iv) the P300 and LPP, thought to reflect the cognitive appraisal of those stimuli. Behavioural results demonstrated that relative to the other gaze condition, direct gaze perception facilitated emotion discrimination, while averted gaze facilitated attention discrimination (Study 1). The perception of direct gaze within positive contexts was associated with increased empathy for the gazer, and increased positive emotion for the observer (Study 2). Participants rated that the gazer was feeling more positive when they displayed direct gaze as opposed to averted gaze, and that they were feeling more aroused during negative contexts with averted gaze than direct gaze (Study 3). At the neural level, eye-gaze perception interacted with emotional aspects of each task, during both early and late time-windows known to be sensitive to emotional processing. Eye-gaze interacted with task demands to modulate N200 activity in Study 1, with different patterns of eye-gaze effects seen in each task. Eye-gaze and sentence valence also interacted to modulate the N100 and P200 in Study 2, during the affective empathy task. These early N100, N200 and P200 effects may reflect eye-gaze modulation of a frontocentral brain network that responds to emotional stimuli. During the affective theory of mind task in Study 3, eye-gaze and sentence valence interacted later, on the centroparietal LPP and the P300 tail end. This gaze modulation appeared to reflect a unique modulation linked to cognitive appraisal of emotional content. The pattern of results suggests that early neural eye-gaze effects may reflect the initial processing of emotional stimuli and may be responsible for the eye-gaze effects seen behaviourally on the observer's emotional state. In contrast, later neural eye-gaze effects may reflect the cognitive appraisal of eye-gaze linked to higher social processes, and these may be responsible for the impact of eye-gaze on emotional appraisals of the gazer. These results have implications for understanding neurotypical eye-gaze processing as well as clinical populations that present with both altered eye-gaze processing and social impairment.