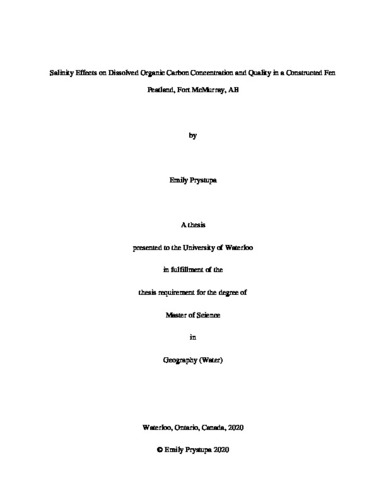 In northern Alberta, oil sands mining disturbs the landscape; reclamation to an “equivalent land capability” is required, and industry is testing peatland construction as part of landscape reclamation. To determine if these constructed peatlands can be self-sustaining, an understanding of the cycling of solutes in peat pore water and their interactions with dissolved organic carbon (DOC) is needed. DOC is a component of pore water that is of interest due to its biotic relevance and its impact as a component of the carbon budget. Additionally, salinity as a control on DOC quantity and quality may be important in reclaimed systems due to the likelihood of elevated sodium (Na+) from saline groundwater input derived from the tailings used to construct reclaimed catchments. As part of post-mining oil sands reclamation, a pilot fen (Constructed Fen) was constructed to test reclamation techniques for peatland establishment. Previously, DOC in the Constructed Fen was found to be largely internally produced, suggesting rhizodeposition, decomposition and solubility govern DOC dynamics. For this research DOC concentration and quality, and Na+ concentration were measured in the rooting zone of the Constructed Fen to evaluate the role of Na+ in DOC dynamics. DOC concentration and quality throughout the fen revealed that DOC was largely sourced from vegetation inputs. Increases in vegetative inputs between years was indicated by the annual increase in DOC lability. Elevated Na+ at 30 cm below ground surface (bgs) corresponded with high concentrations of labile DOC. This relationship suggests increased rhizodeposition contributing labile carbon to DOC and decreased decomposition preserving labile DOC. At 10 cm bgs, spatial variability and temperature were the largest predictors of DOC quantity and quality. With expected increases in Na+ at this site, increased production of a mobile and microbially active fraction of DOC may lead to higher rates of carbon export. Due to the identification of rhizodeposition as a potential mechanism of the influence of Na+ on DOC and its suggested importance in previous years, a hydroponic study characterizing the rhizodeposits of the dominant plant species of the Constructed Fen (C. aquatilis and J. balticus) under different Na+ concentrations was performed. Rhizodeposition was similar between species with no difference in rate and similar proportions of the fractions of rhizodeposits investigated. Both species exhibited potential tolerance mechanisms to Na+ accumulation through suspected Na+/H+ antiporter activity and increases in membrane stabilizing aromatics. Elevated Na+ did not significantly change rates of rhizodeposition but there was a general increase in aromatic and polyphenol rhizodeposition and decrease in biopolymer and organic acid rhizodeposition. This represents a shift to lower molecular weight more aromatic rhizodeposits; however, as this study did not consider the contribution of low molecular weight neutrals to rhizodeposition, the results could not be applied directly to field results. Given the large contribution of aromatics and biopolymers to rhizodeposition (average 63% and 25% of measured rhizodeposits, respectively), it is recommended that these fractions be considered in rhizodeposition studies. The findings of this work thus provide a foundation for understanding the effects of Na+ concentration on rhizodeposition and identify Na+ as playing a significant role in peatland DOC dynamics.