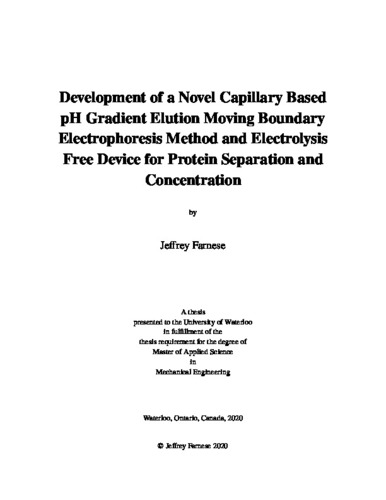 Proteins are the raw material input required for a number of biomedical purposes. In order to keep pace with the exponential demand for protein consumption from research institutions and biopharmaceutical companies, new developments in methods to isolate and collect proteins will be necessary. On top of that, as quantum computing becomes more widespread and accessible to all levels of protein researchers, the market will undoubtedly look for high quality products at lower costs. The current state of technology can be separated into two categories: high throughput and high resolution; however, there appears to be a gap in combining the two categories into a single method. The work presented in this thesis is an attempt at bringing these two categories together through capillary electrophoresis to meet future demands in protein research. Methods in capillary electrophoresis have proved extremely effective in precision manipulation of fluids and particles at the micron scale. The new method, termed pH gradient elution moving boundary electrophoresis (pHGEMBE), separates proteins based on their isoelectric point (pI). The technique was inspired by the high resolution capabilities of isoelectric focusing (IEF), combined with the counter-flow gradient nature of gradient elution moving boundary electrophoresis. The fundamental principles of pHGEMBE were modelled numerically using COMSOL Multiphysics to predict protein behavior in an electric field. Experiments were carried out using commercially available capillary cartridges developed by Advanced Electrophoresis Solutions (AES). These capillary cartridges have a coating which suppresses electroosmotic flow (EOF), which removed a layer of complexity in the development of the new technique. Separation tests were carried out using fluorescent IEF markers, which have a iii known isoelectric point, to visualize the separation process. Validation of the process was performed on the CE Infinite analytical imaged capillary isoelectric focusing (iCIEF) system, made by AES. Electropherograms were produced for a control sample containing the initial mixture of markers, and of samples separated by the pHGEMBE process. The electropherograms showed complete separation of sample mixtures for markers with pI difference as low as 1.4 from their published values. A prototype system was designed and tested which incorporates all of the components to perform pHGEMBE for concentrating and separating up to four proteins. Recommendations for improving the resolution are discussed. To mitigate negative effects associated with electrolysis during capillary electrophoresis techniques such as IEF, the capillary cartridge incorporates large reservoirs to isolate the separation capillary from the electrodes. To avoid electrolysis altogether, a low voltage separation device was designed and tested. This device uses a polymer membrane with track-etched pores to act as the separation capillary. Initial results demonstrated the ability to generate a large enough electric field to interact with the dye Ponceau S with as low as 0.7 volts, which is low enough to avoid electrolysis. The prototype device demonstrated that: (1) charged particles can be manipulated while avoiding electrolysis, and (2) the membrane design could be a practical way of constructing a future device capable of separating large sample volumes, not typical of convectional capillary electrophoresis methods.