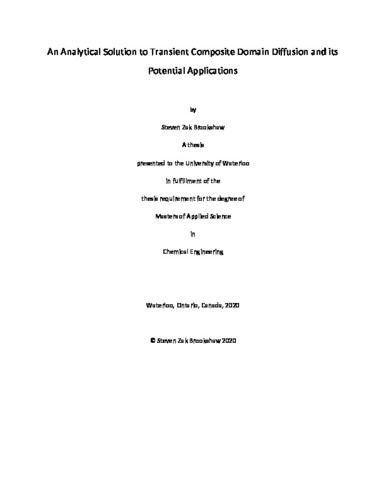 The work developed here was initially made to provide a comprehensive model for the modified Loschmidt cell, but the project evolved to derive a more robust transient composite domain diffusion (TCDD) model. The original work created a symmetrical TCDD model in cartesian coordinates. But the project grew to create a TCDD model for: any geometry, symmetric / non-symmetric and for any homogenous exterior boundary condition. The expansion of the work allows for this TCDD model to apply to more applications. Since, many complex experiments resort to quasi-steady state models to perform their analysis, when a more accurate TCDD model would be better suited. For instance, the need for a more accurate model for the modified Loschmidt cell was shown in [1], where the quasi-steady state model currently used to extract the effective diffusion coefficient had errors potentially as high as 100%. Whereas, the model developed here does not employ any assumptions regarding their experiment, and thus would yield better results. The model developed utilized Vodicka’s Orthogonality to resolve the inhomogeneous boundary conditions applied to the interior boundaries of the composite domain. The model was validated experimentally, by adapting a known radial diffusion experiment to become a composite domain diffusion experiment. The experiment, created by Kim [2], was adapted by performing it on an annulus disk and retrieving the effective diffusivity using the TCDD model and comparing those results to the solid disk’s. From this experiment it was statistically shown that the two models retrieved the same values, thus validating the TCDD model. Also, this thesis analyzed which solver was best to conduct parameter estimation on the model, by creating artificial data of a modified Loschmidt cell and fitting the known effective diffusivity that produced the concentration profile. It was discovered that in simple geometries, derivative based solvers work best. However, as the modified Loschmidt cell reached 8 different domains of diffusion, a brute force tactic was considerably more accurate. Therefore, since this model developed is equipped to replace the erroneous quasi-steady state model of the modified Loschmidt cell, it should be employed to perform its parameter estimation.