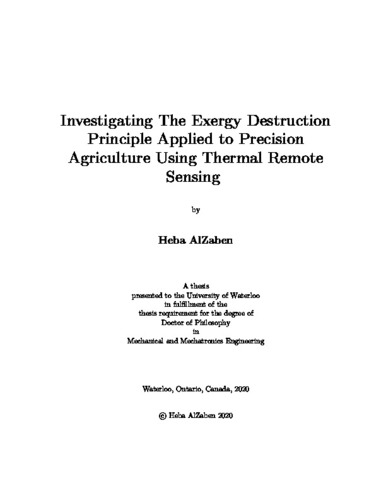 Nitrogen is one of the most important yield-limiting nutrients for corn (Zea mays). In this research the exergy destruction principle (EDP) is applied as a theory to explain the expected inverse relationship between surface temperature and nitrogen stress. This is the first multi-year, greenhouse and field, study to systematically investigate thermal remote sensing for detecting nitrogen stress in field crops. Two hypotheses are developed as predicted by the EDP. It is hypothesized that agricultural crops experiencing greater growth and providing greater yield will have lower surface temperatures. The second hypothesis is that crops grown under optimum/higher rates of nitrogen will have lower surface temperatures compared to crops grown under nitrogen stress conditions. The two proposed hypotheses are tested under greenhouse and field conditions on corn plants at three different scales (i.e., leaf, canopy and over a plot area). Field studies were conducted during four summer seasons (2016, 2017, 2018 and 2019) on an established long-term field trial of corn yield response to varying rates of nitrogen. Greenhouse experiments were conducted at the University of Guelph and the University of Waterloo from Oct 2015 to May 2016 and from Apr 2019 to Feb 2020, respectively. Whorl temperatures were collected for continuous temperature measurements during the day and night cycle as a proxy for crop temperature to investigate if there is a variation in crop temperature with nitrogen stress. Canopy and leaf temperatures were collected using a high-resolution thermal camera, and an infrared hand-held point measurement gun, respectively. During the day, it is found that corn surface temperatures are lower for corn plants that received higher rates of nitrogen. A shallow but statistically significant negative slope is observed consistently with increasing rates of nitrogen. An approximate 0.5-1 C average temperature variation between corn plants that experienced different levels of development (i.e., yield and leaf stage) due to nitrogen stress appears to be a reasonable magnitude given that ecosystems with a wider variation in development observed 5 C average temperature variation. Surface temperature measurements, however, were highly variable. This variability is the result of many external and weather dependent variables that affect crop canopy temperature. Despite this variability, the exergy destruction principle (EDP) provides a theoretical background from which thermal remote sensing can be applied through surface temperature measurements to detect physiological stress in crop plants at early growth stages, before any visual indicators appear on plant surface. In addition, an average emissivity of 0.96 0.006 for corn leaves over the 7.5-14 um waveband is determined from multiple laboratory experiments measuring corn leaves spectral reflectance collected from corn plants grown under greenhouse and field conditions. This emissivity can be used as a reference value in future studies involving corn plants surface temperature measurements. Furthermore, it is concluded that whorl temperature measurement is not a good proxy of crop surface temperature and it can not be used to detect nitrogen stress. This research enhances the potential application of precision agriculture in the application of nutrients, herbicides, and pesticides to crop plants at an optimal time and location, which will subsequently increase production, reduce the cost of excessive input application, and reduce harmful impacts on the environment.