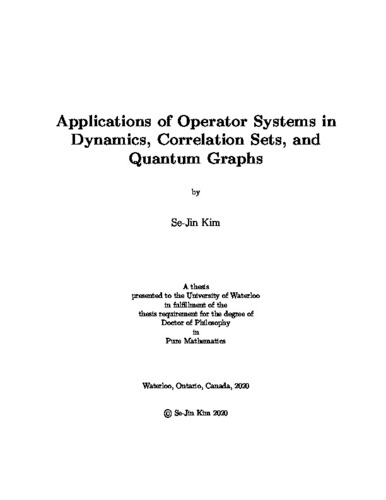 The recent works of Kalantar-Kennedy, Katsoulis-Ramsey, Ozawa, and Dykema-Paulsen have demonstrated that many problems in the theory of operator algebras and quantum information can be approached by looking at various subspaces of bounded operators on a Hilbert space. This thesis is a compilation of papers written by the author with various coauthors that apply the theory of operator systems to expand on some of these results. This thesis is split into two parts. In Part I, we start by expanding on the theory of crossed product of operator algebras of Katsoulis and Ramsey. We first develop an analogous crossed product of operator systems. We then reduce two open problems on the uniqueness of universal crossed product operator algebras into one of operator systems and show that it has answers in the negative. In the final chapter of Part I, we generalize results of Kakariadis, Dor On-Salmon, and Katsoulis- Ramsey to characterize which tensor algebras of C*-correspondences admit hyperrigidity. In Part II, we look at synchronous correlation sets, introduced by Dykema-Paulsen as a symmetric form of Tsirelson’s quantum correlation sets. These sets have the distinct advantage that there is a nice C*-algebraic characterization that we present in Chapter 6. We show that the correlation sets coming from the tensor models on finite and infinite dimensional Hilbert spaces cannot be distinguished by synchronous correlation sets and that one can distinguish this set from the correlation sets which arise as limits of correlation sets arising from finite dimensional tensor models. Beyond this, we show that Tsirelson’s problem is equivalent its synchronous analogue, expanding on a result of Dykema-Paulsen. We end the thesis by looking at generalizations of graphs by the ways of operator subspaces of the space of matrices. We construct an analogue of the graph complement and show its robustness by deriving various generalizations of known graph inequalities.