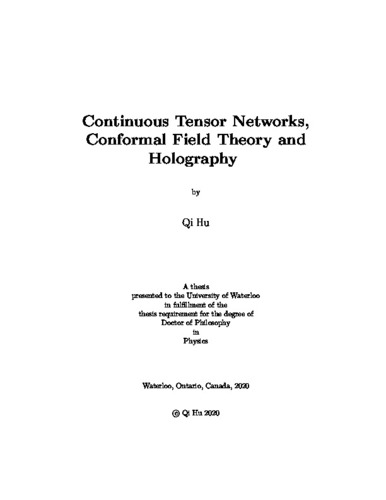 Tensor network methods are playing a central role in multiple disciplines of modern quantum physics, such as condensed matter physics, quantum information and quantum gravity. Based on renormalization group (RG) ideas, they provide a large class of variational ansatz for quantum many-body systems. There are various tensor network structures which are suited for different systems based on their entanglement structures, such as matrix product states (MPS), projected entangled pair states (PEPS), multi-scale entanglement renormalization ansatz (MERA). Numerous techniques involving coarse-graining tensor networks have been developed, such as tensor renormalization group (TRG), tensor network renormalization (TNR) and its variants. First, we study the generalization of MERA to continuous systems, or cMERA, which is expected to become a powerful variational ansatz for the ground state of strongly interacting quantum field theories. We investigate, in the simpler context of Gaussian cMERA for free theories, the extent to which the cMERA state $\ket{\Psi^{\cM}}$ with finite UV cut-off $\Lambda$ can capture the spacetime symmetries of the ground state $\ket{\Psi}$. For a free boson conformal field theory (CFT) in 1+1 dimensions as a concrete example, we build a quasi-local unitary transformation $V$ that maps $\ket{\Psi}$ into $\ket{\Psi^{\cM}}$ and show two main results. (i) Any spacetime symmetry of the ground state $\ket{\Psi}$ is also mapped by $V$ into a spacetime symmetry of the cMERA $\ket{\Psi^{\cM}}$. However, while in the CFT the stress-energy tensor $T_{\mu\nu}(x)$ (in terms of which all the spacetime symmetry generators are expressed) is local, the corresponding cMERA stress-energy tensor $T_{\mu\nu}^{\cM}(x) = V T_{\mu\nu}(x) V^{\dagger}$ is quasi-local. (ii) From the cMERA, we can extract quasi-local scaling operators $O^{\cM}_{\alpha}(x)$ characterized by the exact same scaling dimensions $\Delta_{\alpha}$, conformal spins $s_{\alpha}$, operator product expansion coefficients $C_{\alpha\beta\gamma}$, and central charge $c$ as the original CFT. We argue that these results should also apply to interacting theories. Second we extend TNR to field theories in the continuum. A short-distance length scale $1/\Lambda$ is introduced in the continuum partition function by smearing the fields. The resulting object is still defined in the continuum but has no fluctuations at distances shorter than $1/\Lambda$. An infinitesimal coarse-graining step is then generated by the combined action of a \textit{rescaling} operator $\mathfrak{L}$ and a \textit{disentangling} operator $\mathfrak{K}$ that implements a quasilocal field redefinition. As demonstrated for a free boson in two dimensions, continuous TNR exactly preserves translation and rotation symmetries and can generate a proper RG flow. Moreover, from a critical fixed point of this RG flow one can then extract the conformal data of the underlying conformal field theory. Leaving behind tensor network methods, we explore the universal structure that emerges from the eigenvectors of the reduced density matrix (RDM) for 1+1 dimensional critical lattice systems. Using the Ising model as an example, we demonstrate that the large-weight eigenvectors are related to the low-lying states of the underlying CFT with suitable boundary conditions by a conformal map, and they transform accordingly under the Virasoro generators. Finally, using the quantum renormalization group (QRG), we derive the bulk geometry that emerges in the holographic dual of the fermionic U($N$) vector model at a nonzero charge density. The obstruction that prohibits the metallic state from being smoothly deformable to the direct product state under the renormalization group flow gives rise to a horizon at a finite radial coordinate in the bulk. The region outside the horizon is described by the Lifshitz geometry with a higher-spin hair determined by microscopic details of the boundary theory. On the other hand, the interior of the horizon is not described by any Riemannian manifold, as it exhibits an algebraic non-locality. The non-local structure inside the horizon carries the information on the shape of the filled Fermi sea.