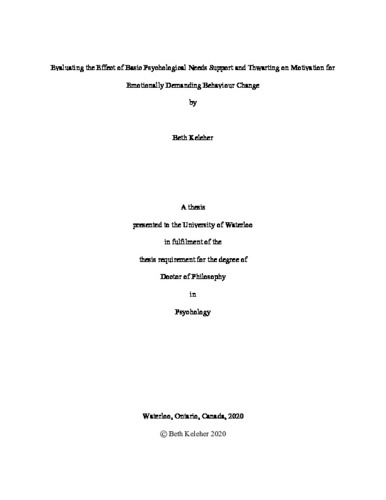 According to numerous sources, common factors found in all psychological intervention methods are significant predictors of treatment outcome, potentially holding even greater predictive power than treatment techniques used in any one individual therapy method (e.g., Horvath & Symonds, 1991; Martin, Garske, & Davis, 2000; Safran & Muran, 2006; Wampold et al., 1997; Zuroff & Blatt, 2006). In response to the gap in our understanding of how psychotherapy leads to positive outcomes and therapy completion, several authors have investigated the possible contribution of Self-Determination Theory (SDT) variables to therapeutic change (e.g., Mansour et al., 2012; McBride et al., 2010; Zuroff et al, 2007; Zuroff et al., 2012). SDT is an overarching theory of human motivation, development, and wellness (Ryan & Deci, 2017). The model proposes that people’s basic psychological needs for autonomy, competence, and relatedness must be satisfied for personal growth and mental health, and that that these three needs form the basis for the movement from controlled to autonomous or intrinsic forms of motivation (Ryan & Deci, 2008; Ryan, Lynch, Vansteenkiste & Deci, 2010). Given the theoretical underpinnings of SDT (i.e. that needs satisfaction is central to the development of more internalized forms of motivation), it is probable that the common psychotherapeutic factors of basic needs support and resulting needs satisfaction would contribute to stronger intrinsic motivation for treatment. These hypotheses were investigated in a series of two studies, both employing basic needs support and/or thwarting as the active ingredient used to affect participant motivation for and compliance with the intervention. In Study 1, we developed an analogue intervention study to examine the effect of basic needs support and satisfaction in psychotherapy on motivation for treatment, engagement and persistence in treatment, and therapy homework completion. Undergraduate participants were recruited to participate in a mindfulness stress-reduction intervention with a deception component. Participants’ basic psychological needs were either supported or thwarted in-lab by researchers. Results indicated that needs support and thwarting during our in-lab manipulation predicted needs satisfaction at endpoint. Further, greater competence satisfaction predicted higher ratings of motivation, and greater relatedness satisfaction predicted more homework completion. Several hypotheses were not upheld (e.g., higher endpoint autonomy or relatedness satisfaction did not predict greater endpoint motivation). However, daily means of needs satisfaction aggregated over the week indicated that greater overall autonomy and competence satisfaction predicted greater autonomous motivation across study days. We attempted to address Study 1’s limitations (e.g., underpowered support and thwarting interventions) with a follow-up study. In Study 2, participants assigned a person within their social circle (e.g., friend, sibling) to encourage them in an attempt to reduce their social media use over the course of two weeks. We predicted that participants’ loved ones would use a variety of behaviours and support methods to encourage participants’ social media reduction, and that some participants would perceive their supporter’s actions as more or less supportive or thwarting. Results indicated that participants who anticipated or experienced more needs supportive behaviours from interpersonal relationships during the study experienced greater reduction of social media use. No relationship was evident between participants’ ratings of their supporters’ thwarting behaviours and behavioural change outcomes. Participants who perceived their supporters to be more needs supportive experienced greater autonomous and controlled motivation to reduce social media use. However, participant ratings of autonomous and controlled motivation bore no significant relationship to ratings of social media reduction. A significant relationship between perceived needs support, satisfaction, and behaviour change emerged in both studies, despite the unexpected null relationship between motivation and behaviour change. Results from Studies 1 and 2 suggested that basic needs satisfaction ratings do not necessarily align with experiencing perceived support of said needs, even if support predicts task completion. It appears possible that needs support, and relatedness support in particular, may be an important contributing factor for engagement in emotionally demanding tasks regardless of perceived needs satisfaction or felt motivation. Moreover, our Study 1 results reinforced the additive hypothesis of needs satisfaction as it contributes to intrinsic motivation (i.e., each need uniquely contributes to motivation, regardless of the level of satisfaction of other needs; Dysvik, Kuvaas, & Gagné, 2013). As more research signals the important contribution of both competence and relatedness satisfaction to the internalization of more autonomous forms of motivation and emotionally-demanding task completion, it will be important for researchers and clinicians to attend to the support of these basic needs. Further, there would be value in future prospective research evaluating the effect of needs support and satisfaction on motivation without external pay or credit incentives. Future research in this domain would benefit from examining interpersonal support and thwarting in a psychotherapy context.