On the effects of offloading memory on memory performance 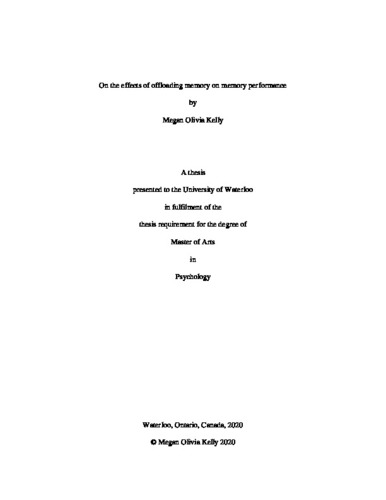 The use of external aids to reduce cognitive demands is known as cognitive offloading. I present five preregistered experiments aimed at better understanding the effects of cognitive offloading on memory performance. The first two experiments (Chapter 1) tested the extent to which offloading resembles intentional/directed forgetting by examining the serial position effect for offloaded information. Both experiments demonstrated a reduced primacy effect under offloading conditions, thereby supporting the idea that similar processes might be engaged during offloading and intentional/directed forgetting. That is, both may be associated with a reduced engagement in intentional mnemonic strategies (e.g., rehearsal). In the next two experiments (Chapter 2), I tested a resulting prediction that memory phenomena that are not solely by-products of such mechanisms should remain even when we offload. These two experiments used the isolation effect (better recall of a salient item than of surrounding items) and, consistent with this prediction, revealed robust isolation effects in both offloading and no-offloading conditions. These two experiments also re-examined the serial position effect as a function of offloading with a within-participants design and found mixed support for the results of the first two experiments (Chapter 1). A fifth and final experiment (Chapter 3) replicated and extended the experiments in both prior chapters with respect to whether offloading influences isolation and serial position effects. This final investigation concluded that findings were generally consistent across all experiments, however, the effect of offloading on the primacy effect may be smaller than found initially. Taken together, these investigations provide deeper insight into the nature of the underlying mechanisms when offloading memory and, as a result, enhance our understanding of the associated costs and benefits.