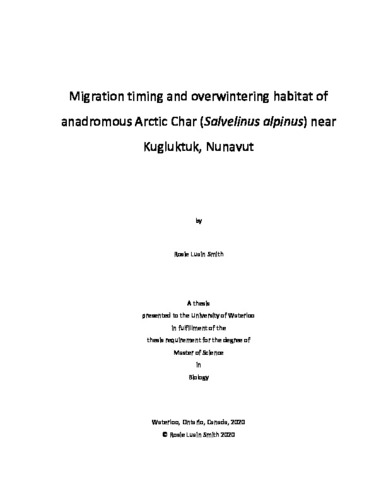 Arctic Char (Salvelinus alpinus) is a key component of subsistence diets in Inuit communities across the Arctic. The Hamlet of Kugluktuk, in the Kitikmeot region of Nunavut, relies on the Coppermine River to support an important fishery of anadromous (i.e., sea-run) Arctic Char, which feed in the ocean in summer and return to freshwater in fall to spawn and overwinter. Arctic Char is a highly plastic species, and while the exhibited diversity of life history strategies and migration patterns likely contributes to their persistence across a challenging landscape, it also necessitates population level information to identify stressors and effectively manage subsistence fisheries. The migration patterns of Arctic Char using the Coppermine River and surrounding area are poorly understood, and overwintering movements and habitat use in fluvial environments in general are largely unknown for Arctic Char. To address these knowledge gaps, acoustic transmitting tags were surgically implanted in 164 healthy adult Arctic Char captured in the Coppermine River and Coronation Gulf in 2018 and 2019. An array of forty-seven acoustic receivers was deployed in freshwater and marine environments during the 2018 and 2019 ice-free seasons, with a subset left to detect 2018 winter movements in the Coppermine River. Consistent with local knowledge, telemetry data indicate that some Arctic Char do not overwinter in typical (i.e., lacustrine) habitats, and instead overwinter in the Coppermine River below Kugluk Falls (a substantial migration obstacle). Overwintering in fluvial environments is likely energetically costly and hazardous in a dynamic system such as the Coppermine River, which experiences substantial surface ice accumulation, slush, anchor ice, and hanging dams. Within the lower reaches of the Coppermine River, net downstream movement in winter was observed for ten (37%) individuals and five individuals were observed to enter the marine environment prior to river break-up in the spring. Under-ice movement into the marine environment has not been previously documented for Arctic Char, and this behavior suggests that the fitness benefit gained through early spring migration to rich ocean feeding grounds may outweigh the risks associated with fluvial overwintering. Following summer marine feeding, adult anadromous Arctic Char that migrated above Kugluk Falls entered freshwater earlier than those overwintering below Kugluk Falls, indicating that the length and difficulty of the migratory pathway affect fall migration timing. Particularly for those individuals overwintering below Kugluk Falls, smaller individuals entered freshwater later than larger individuals, likely due to the potential for proportionately greater gains in body condition for smaller individuals in the marine environment. This descriptive study helps further understanding of the variation in migration patterns and life history tactics employed by Arctic Char in the region. The high inter-individual and inter annual variability that was observed in migration destination and timing provide a basis for future research on drivers of these patterns, such as spawning status, environmental cues, and population dynamics. Results will help in the management of local fisheries and in ensuring the future sustainability of this important food source.